When Ace joined up with KISS he wasn't the Les Paul man he would later become but this was out of necessity rather than choice - he simply couldn't afford a Les Paul. In Ace's own words he "used to use an old Epiphone with an old humbucker in it" (GTRTW 1996). Although I think he was wrong about the humbucker, he got the guitar right. For KISS's first real club gig on January 30, 1973 Ace played an Epiphone Coronet.

The Epiphone Coronet, which was Gibson-made, was initially an alternative to the Gibson Les Paul Jr. It was a basic one-pickup solidbody guitar for a good price, no more and no less. The one that Ace played during the early part of 1973 was probably a 1960 or '61 model: it has the "second generation" body style with rounded edges [1]; the symmetrical "batwing" pickguard; and, although just barely visible under Ace's right hand, a P-90 pickup with a black plastic cover. In the March 10 pic you can see a small patch of black above Ace's right hand that is the "dogear" of the P-90. A standard-sized humbucker wouldn't show up in that position. [2] The cherry finish shown was the only one available. The metal headstock logo plate, clearly visible in the January 30 pic, was replaced by a pearl logo in 1961 but the remaining stock of the metal logo plates were used on guitars produced in early 1961.

The pic from March 10 shows Ace beginning to develop his trademark makeup and a slight change to the Coronet. The logo plate has been removed and the tuners changed. The stock Coronet had 3-on-plate Kluson Deluxe tuners with oval white tuning pegs (which can be seen in the January 30 pic if you strain your eyes a bit) but here we see metal tuning pegs of indeterminate style. The pics aren't exactly stellar in quality so it's hard to see whether or not Ace retained the original Gibson-style knobs or not.

There is one more photo from May 4 when the Coronet is barely visible, only the headstock shows up behind Paul and then with the "T-style" logo plate restored, but after that the Coronet is outed by the Ovation Breadwinner. 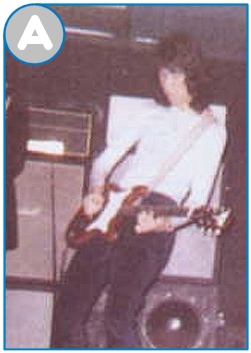 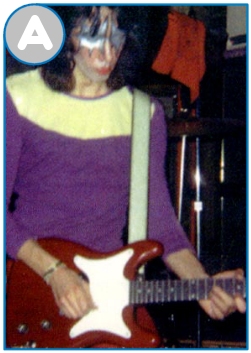 [2] However, the catalog entry for the Coronet for both 1961 and 1962 show the guitar with the earlier New York pickup

The details of this "communal backup guitar" were covered in the Paul section so this is just a brief re-telling. It's another Epiphone Coronet but this one appears to be a 1961 or '62. [3] The guitar was probably procured some time in August of 1975 and it's actually Paul who shows up with this particular Epiphone Coronet first on September 14 in Wilkes-Barre, PA. Before then Ace seems to have a Gibson Les Paul Jr and then an Epiphone Olympic as his backups. Come the Alive! Tour the Coronet became part of the backup rotation, Ace gets some mileage out of it on October 4 in Passaic, NJ and it shows its face in some backstage shots from Toledo, OH on November 12. So, a quick recap of the many changes to this guitar: the tuners have been changed to Schaller M6's; it's been refinished white; the P-90 pickup has been replaced (probably with a DiMarzio); and from the looks of it the bridge has probably been replaced as well. [4] The knobs on this Coronet are speed knobs and look like they could have been taken from a Gibson Les Paul.

This Coronet doesn't seem to last past 1975. All appreances of the white Coronet, in either Paul or Ace's hands, seem to date to September-November 1975 and the last time I've seen it is in Chicago, IL on November 22. Backup guitars weren't used much in those days [5], they were only there for relief duty when the no. 1 had to be re-tuned or worked on, so the brief periods of use as seen in the picture records might not tell the entire story; most of these guitars could very well have stayed on for longer periods of time but gotten little use (or simply not being caught on camera when they were used). By December Ace can be seen wielding the Travis Bean for encores and the white Coronet is seen no more. 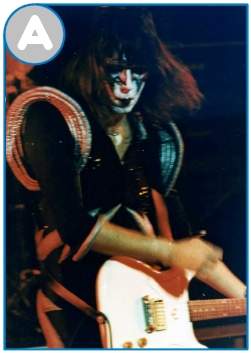 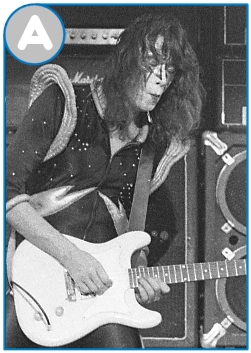 [1] The earlier Coronets had a slab-style body that was a little thicker. The new body had "a new thinner cutaway" which was "strictly modern and strictly wonderful" according to the 1961 catalog

[3] The shape of the pickguard where it meets the neck differed slightly on the 1962 model with the "cuts" not being as deep on either side. But, just like the using up of the leftover stock of the metal logo plate it seems as if some 1962 Coronets retained the older pickguard.

[4] See the Coronet part of the Paul section for a better close-up of the guitar. The replacement bridge is probably a Leo Quan PAF Badass. I find the Schaller M6 tuners to be odd, Ace never really used those on any other guitar.

[5] I made a similar comment in the Paul section but it is rather odd that a band that had a sponsorship with Gibson, and evidently enjoyed the instruments Gibson made, had so few backup guitars by that brand. Instead we find experimental guitars (see the Veleno for instance) and a ridiculously modified budget guitar of yore (this Epiphone).