Introduced in 1971 with sales staring in 1972, the Breadwinner (also known as the 1251) was Ovation's first foray into the world of electric solidbody guitars, shortly thereafter followed by its sibling the Deacon (the 1252). After "graduating" from the Epiphone Coronet Ace ended up with a Breadwinner and it's either a '72 or '73. It's well known that in 1973 the band had virtually no money and a 1973 Breadwinner had a retail price of $349 which means that a used 1972 might be more plausible. Although often lauded for its ergonomical design it was apparently designed to resemble a "medieval battle axe because musicians at the time often referred to their instruments as their 'axe' ". [1] Ace first shows up with his 1251-6 Breadwinnwer, the '6' being the suffix for the white version, on July 13.

The original pickups were "toroidal" pickups which, according to the 1973 catalog, had 12 individual magnetic poles, six rectangular and six circular, the latter of which were adjustable. These were summarily replaced by Ace with DiMarzios. "I used a crazy-looking Ovation that had an old hand-wound DiMarzio pick-up in it for a few early gigs." (GTRTW 1996) [2] There are, to my knowledge, no pictures that show Ace playing or posing with the Breadwinner with its original pickups.

The Breadwinner had what is generally regarded as the first active electronic system in the shape of a FET preamp which was powered by two 9-volt batteries hidden behind a metal plate on the back of the guitar, and its controls were somewhat irregular compared to a regular guitar. [3] The volume, the knob located closest to the bridge, was the one thing that was normal. The tone knob had the "full-on" setting of other guitars at the midpoint which means it could get really bright, and in conjunction with the "band rejection filter" (essentially a midrange bypass) of one of the mini switches it was capable of a wide variety of tones. The three-way pickup selector (the second, lower mini switch) was also slightly odd in that that it had the following positions: neck, bridge, and both pickups out of phase. Compared to most two-pickup guitars which have neck, both (in phase), and bridge this would have been awkward for most players and for a player like Ace, who more or less never uses his neck pickup, it might have been a bit much. That's probably why the Breadwinner shows up at the showcase gig at Le Tang's on September 28 with a new set of switches.

Both the Le Tang pic and later pictures from the recording of the first album (see p. 157 in Nothin' to lose by Ken Sharp) show the guitar with a new mini switch in between the two original ones and, although the quality of the pictures don't exactly allow for any detailed views, it appears that the original three-way selector has been removed and replaced with something else (possibly just a small coverup of some kind). The Breadwinner had its controls mounted on a circuit board so for Ace to add the new switch it's very likely that he had the better part of the original circuitry removed and converted to a more regular volume/tone/PU-switch setup. Interesting to note about the pictures from the first album recording sessions is that the pickups have gotten regular chrome covers. Whether or not the pickups themselves have been changed is unknown. [4] Either way, this Ovation Breadwinner was Ace's main guitar for the recording of the classic eponymous first album. The only other guitar he has been pictured with during those sessions is a Fender Thinline Telecaster. Even Paul seems to have used the Breadwinner to complement his Les Paul Custom as evidenced by the picture on p. 163 in Nothin' to lose by Ken Sharp. [5]

Some time in November or December of 1973 Ace bought his cherished Les Paul Deluxe. It first appears for the club gig at the Coventry on December 21 and was the undisputed no. 1 for Ace from then on. The Breadwinner does hang on for a bit though as the picture from the Academy of Music rehearsal on December 26 shows. It might have been used as a backup for a little while in 1974 but after that rehearsal shot it doesn't appear in any pictures again.

[1] Interview with the designer on The Ovation Breadwinner site 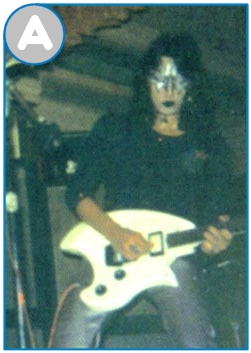 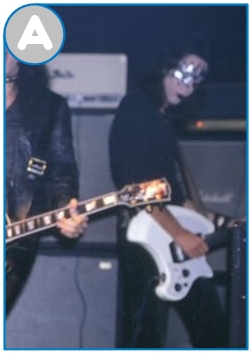 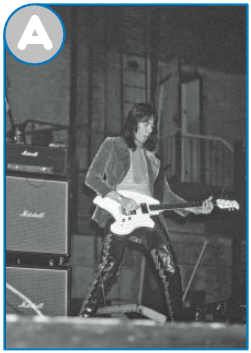 [2] Ace's quote in GTRTW claims that he got the pickup on the day of the Hotel Diplomat show, which we can assume would be the show on July 13, soldered it into the Breadwinner before soundcheck and played the show with the new pickup.

[3] These features were part of a truly innovative instrument and Ovation didn't spare the superlatives. In an early ad it's stated that "[The Breadwinner] has innovations that make it different from every other solid body ever built. First, we simplified the controls and then, improved the performance by adding a small FET pre-amplifier to the circuitry. These features, combined with Ovation's new Torodial pick-ups give you a powerful clear sound, a full-bodied treble with maximum sustain and no hum or squeal."

[4] It is of course perfectly possible that Ace just put some chrome covers on the DiMarzios he had installed. Considering his later reluctance when it comes to the use of pickup covers over his DiMarzios it doesn't seem entirely likely though and a good guess would be that he had something like Gibson PAF's installed for the recording.

[5] Paul might just have been fooling around with Ace's Breadwinner in between takes but in the pic he is wearing headphones which suggests that it was in his hands for recording purposes rather than pure playing pleasure.