The Veleno Original is the strangest guitar Ace has ever played, and it earns that distinction by a wide margin. The Veleno is really the only guitar that featured an all-aluminum construction; there have been plenty of "metal neck" guitars but the Veleno really went all in. Although originally made using cast technique the process was soon changed to carving which means that the two sections of the body, front and back, are machine carved from two solid blocks of aluminum resulting in what is essentially a hollow-body guitar. The electronics are fitted from the back of the front piece which means that in order to access it you need to open up the back and remove the entire back piece. (Anyone fortunate enough to own a copy of the November 1988 issue of Guitar World can see how a Veleno looks disassembled.) [1]

Despite being a high-profile guitar that was played and owned by a lot of famous guitarists [2] (and some that were just famous for other reasons) the production was small-scale. Veleno built all of his guitars himself and he did so by hand, even going so far as to assemble them at home in his living room while watching TV which he credited with holding production costs down! The distinctive headstock, which is supposed to resemble a "V" for obvious reasons, was an idea given to him by one of his children.

First to clarify one thing, the guitar Ace played was a Veleno Original. It has been stated on some sites that it was a Veleno Traveler but the Traveler, as the name implies, was a short-scale travel guitar originally conceived for B.B. King that was actually tuned up a minor third. Design-wise it looked, for lack of a better description, somewhat like an arrow. With that out of the way, let's take a look at Ace's Veleno Original.

Ace first shows off the Veleno at the rather odd photo shoot on March 20, 1975 and it reveals a number of details. [3] First, this particular Veleno had Gibson humbuckers which was the most common choice even if some were built using Guild pickups and, later on, DiMarzios. Quite unlike most Velenos, Ace's guitar has five control knobs, two mini switches on the upper horn and one on the lower whereas the more "standard" setup was four knobs and one mini switch on the upper horn and one on the lower horn. The lack of a pickguard is curious as those were added as standard when the body parts went from being cast to being machined but it's fairly easy to remove a pickguard.

By the time the Veleno sees action on stage the pickups have either been changed or the pickup covers have simply been removed. It looks a little more polished than it did in March but the control arrangement identifies it as the same guitar. When it comes to pictures showing the Veleno it is one of the more elusive guitars Ace has ever played. The two live pics presented here are two of three I've seen, and from just two different shows, making it about as rare as the cherry Coronet from the club dates. Despite this it appears as if Ace kept the guitar as it shows up in the 1977 Music Life Special. [4] It was later either sold or bestowed upon someone as a gift and in the mid-90's it was part of Bill Baker's collection (as seen in this pic from Bill's excellent web site).

[3] The book Guitar Stories: The Histories of Cool Guitars (2000) has a few pics of Ace's Veleno on p. 242  and claims that it was #5. (Velenos were sequentially numbered meaning that it would have been the 5th one built.) The book is a collection of articles from the magazine Vintage Guitar (the Veleno story originally ran in the January '95 issue) and the text claims that according to Veleno's own records #5 was originally sold to Lou Reed (p. 246). However, an article in The Evening Independent from February 24, 1973 (published in St. Petersburg, FL) clearly states that Reed sold his Veleno to a member of Blood Sweat and Tears. 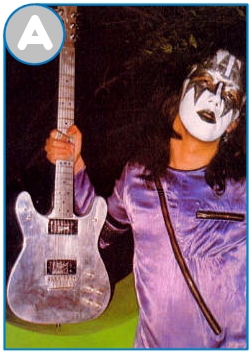 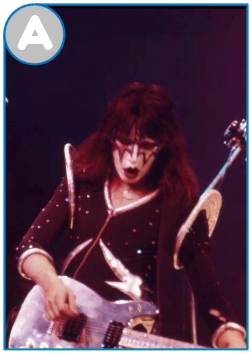 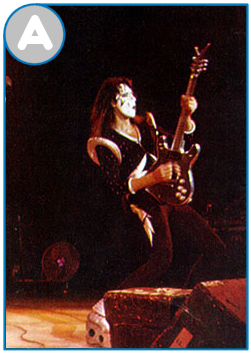 [4] The pic, which shows Ace's collection as of february 1977, is remarkable in that it shows that he kept several guitars that had left his active rotation long ago. Several of the guitars pictured, specifically the many Gibson SG's, also seem to match the later shot from his home studio.

[1] Unfortunately my copy of the physical mag is long lost, so long ago that I didn't even own a scanner at the time. If someone has a scan or can find one I would really appreciate a copy.

[2] A partial list include Eric Clapton, Mark Farner, Lou Reed, Jeff Lynne, and Ronnie Monrose who even went so far as to modifiy his Veleno with a theremin!!

Considering the price tag of around $600 it's a little surprising that Ace actually had one but as can be read below he probably bought it used. Even so, the grand total Veleno guitars was only 145-185 (the numbers vary with the source, Veleno himself has only publicly stated that it was "less than 200") so used ones had to have been precious few in 1975 and the band wasn't making any real money yet.