Introduced in the 1976 Ibanez Golden Oldie pamphlet under the model name 2459, the Destroyer was one of the "lawsuit" guitars produced by Ibanez. The Golden Oldies catalog clearly states that the body of the 2459 was made of "selected solid ash" with an "African Korina finish", there's no mention of the guitar actually being made of Korina. (There is also a mention in the book Ibanez - The Untold Story from 2005 that the guitars were actually made of the Japanese wood sen, commonly referred to as Japanese ash.) However, several print ads from the time (1975 and 1976) state that the body was solid korina. [1] The excellent web site Ibanez Destroyer Information Exchange bluntly states that no model 2459 was ever made of korina wood, they were all ash (or sen).

This particular guitar was originally Paul's who had some modification done on it before giving it to Ace. [2] (Ace can't quite recall whether or not that is true on account of his beer consumption in the 70's.) There was the customary replacing of the pickups and Paul also had the original Harmonic-O-Matic bridge (essentially Ibanez's own version of the ABR-1) replaced with a Schaller Harmonica bridge as was his wont for a while in the mid-70's. To the best of my knowledge Ace never tampered with the basic tune-o-matic style bridges in the 70's, electing to keep the ABR-1 on all his Les Pauls for instance, so the change to the Schaller Harmonica bridge (clearly seen in the backstage pic from Germany and in this closeup from the Spirit of '76 Tour) was almost surely Paul's idea.

The Destroyer first shows itself in Paul's hands for the very last show of the Alive! Tour in Springfield, MA on March 28 (see the Paul section). I haven't seen it in any pics from the brief domestic/Canadian tour in April of 1976 but by the time KISS hits Europe the Destroyer seems to get a lot of stage time. It is all over the place; there are pics from Mannheim, Paris, Amsterdam, Gothenburg, Stockholm, Copenhagen, and Lund. The pic shown here is from backstage at one of the German shows and we get a glimpse at the beautiful wood grain that Ace liked: "that guitar had an incredible grain to the wood, it was gorgeous". (GTRTW 1996) [3]

For the new stage and costumes of the Summer Tour '76 Ace retained the Destroyer. It can be seen in several shots from the rehearsals in Newburgh, NY and come opening night in Norfolk, VA on July 3 it's still part of the show. The pic here highlights an inconsistency in the appearance of the guitar compared to this Ace quote: "I remember taking the pickguard , which was white, and spray painting it cream and then putting cream brackets on it". (GTRTW 1996) Later Destroyer era pictures of the guitar show a white pickguard, it certainly doesn't seem to have changed since Paul appeared with it in March (and the color of the pickguard is nowhere near the cream color of the pickups), so the modification Ace mentions had to have been performed after the guitar was retired from active duty. [4] This seems to happen quickly, after the start of the tour the Destroyer seems to see less action. It doesn't show up in the video footage from Houston or Anaheim in August and to my knowledge it is never used during the Winter Tour.

One thing to note about the Ibanez 2459 Destroyer is that Ace, and probably Paul before him, taped over the logo on the headstock (or had it "erased" as the 1977 Music Life Special puts it). This was probably because of the sponsorship deal the band had with Gibson at the time which was doubly important in mid-76 as the band had just started appearing in ads for the Gibson Marauder.

As a side note, for the taping of the Paul Lynde Halloween Special in October Ace had a "proper" Gibson Explorer with a black pickguard and stock pickups (see the picture on the right). This guitar was almost surely provided by Gibson for some very high-profile, and free, promotion as it's never seen in Ace's hands before or after (and Gene also has a curious, and heavily modified, Gibson on hand for the show).

[2] Paul: "Around the same time I also had an Ibanez Destroyer which was essentially a korina wood Gibson Explorer copy that I gave to Ace. I'm not quite sure why I gave it to him because it was a great guitar." (GTRTW 1996)

[1] One of these ads truly stretch the limits of common decency when it invites us to "explore the Destroyer".

[3] Despite how it might look in some pics Ace only had one explorer-style guitar that he used on stage during this time. Under colored stage lights, especially red lights, the distinct wood grain of the Destroyer could appear washed-out making it appear like another guitar.

[4] The modification is seen in this pic from the 1977 Music Life Special which shows part of Ace's guitar collection as of February 1977. It shows the Destroyer with cream pickup rings ("brackets" as Ace called them) and the text reads: "1: Ibanez Explorer [sic]. The brand name has been erased." (Thanks to balish for the translation.) 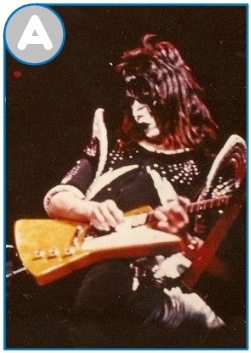 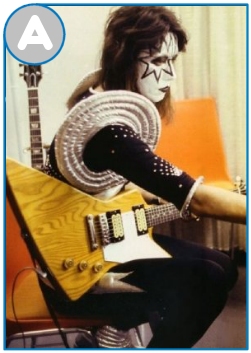 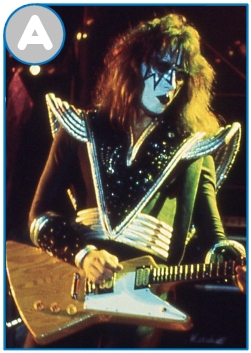 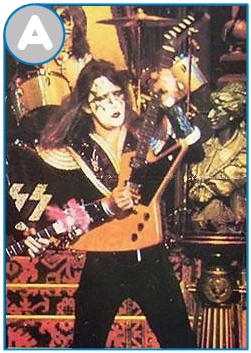