As mentioned in the Paul section there is no real information regarding what kind of relationship the band and its management had with Greco that ended up with Ace and Paul playing Greco guitars for some songs during the 1977 and '78 visits to Japan. Chances are that the entire deal was in fact something that the promotor Mr. Udo had wrangled in order to make the tour a reality. Far less likely is the story in the 1977 Music Life Special that the band had heard about Greco and actively sought out the guitars. (Thanks to Alain for translations of the Japanese original texts.)

Just like Paul, Ace played at least one song using a Greco, his an MR1000R (the R designating the sunburst finish). It seems as if most of the pics of these guitars are taken from one or more of the Osaka shows and the fact that Ace and Paul used them for the same song might indicate that their use was limited to a certain number of songs. (Based on the available pics and what we know of the setlists from that part of the tour I will flatly state that they were at least used for Detroit Rock City.) [1]

The MR1000R as presented in ads and catalog listings of the day had Greco's own U-3000 pickups with chrome covers but Ace's MR1000 shows a bare-coil bridge pickup (while the chrome cover is still on the neck pickup) leading me to believe that the pickup was replaced with one of his beloved DiMarzios.

Overall it's kind of hard to find reliable information about the Greco guitars because virtually all the available information is in Japanese. (And trying Google Translate on Japanese is "interesting" at best.) In that respect the MR1000R is a relative dream while the Greco Ace played in 1978, by all appearances an AK-1400, is an absolute nightmare. As far as I can tell, identifying this flying V guitar as a Greco AK-1400 stems from this Japanese magazine ad. However, this is apparently an ad for the music store Music Land Key. [2] The AK-1400 has never been listed in the Greco catalog, I've gone through every one I could find from 1972-1981 and most of the flying V type guitars are imaginatively named FV. None of them look even remotely like the AK-1400. From the few sources I've been able to find, and piecing together a few phrases here and there using Google Translate, I've been able to figure out that the AK-1400 was a Music Land Key exclusive that was manufactured in cooperation with Greco.

This particular guitar that Ace played, however, was not an AK-1400 but actually a flying V prototype based on the Greco GO model (with the 7-piece laminated neck-through construction). This is evidenced by the "Freedom" inlay work on the fretboard, the very distinct tail piece, and the fact that the fret markers from the 15th fret are circular rather than oval as they were on the production model (all of these details can be seen relatively well in this slightly larger pic). Although not visible in the pics of Ace playing it the inlay at the 12th fret actually says Key Special. The guitar was never actually owned by Ace but was just on loan for the sake of the show.

[1] I base this mainly on the fact that very few songs in the KISS ouvre feature a power chord at the 4th fret and of the songs appearing in the setlist for the Osaka shows only Detroit Rock City does.

Paul used his Greco MR1000 for at least one more song, Makin' love. In the excellent book The illustrated guide to KISS in Japan, the photo on p. 44 shows Paul using the MR1000 with a capo at the 1st fret.

[2] Since this whole section is more or less a castle made of sand I welcome any and all hints, facts or rumours concerning these guitars. Japanese translations in particular are very welcome. 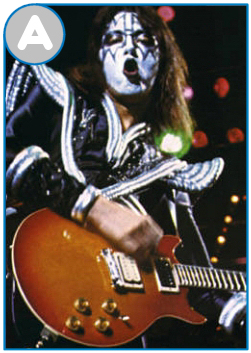 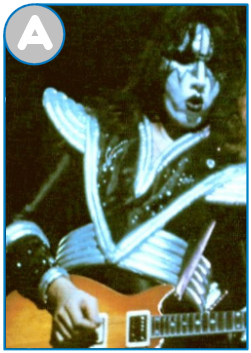 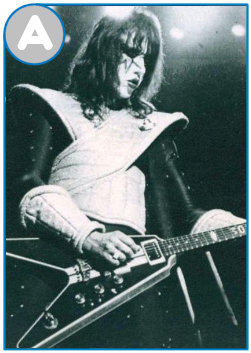 Specs should be taken as rumour rather than fact.