Finding information on Steve Carr and the guitars he built is tough. The only real resource is the interview over at Ace Frehley Les Paul and even that one doesn't really delve into the construction of the guitars and doesn't even mention the custom Explorer discussed here. Apart from that interesting but much too brief interview, Carr and his work has also been mentioned by Twisted Sister guitarist Jay-Jay French for whom Carr performed some modifications - not all of which worked out to French's liking. "The one guitar that Steve Carr really did correctly was transform an otherwise ugly 1979 Tobacco Burst Les Paul, which weighs 10.5 pounds and is essentially a boat anchor, and gave it a pink sunburst finish. That pink Les Paul has been on every recording I have ever made with Twisted Sister." (ToneQuest December 2005) [1]

If I were to venture a guess I would say that the body of the custom Explorer probably was mahogany because that was a favorite or Ace's and the top appears to be flame maple (which looks as if it was bookmatched). Given Ace's love for DiMarzios it would be a huge surprise if the guitar was stocked with anything else. Apart from that we know that the guitar was used mainly for the song Talk to me and its open-G tuning [2] and from the pictures it looks as if it held that job for the entire Unmasked tour.

The custom Explorer stayed with Ace into the short-lived (and ill-fated) Elder era, first making the trip to Mexico in order to lip-synch I was made for lovin' you in September 1981 and then as part of the filmed but ultimately scrapped promotional video for I (shot in October of 1981).

[1] Carr also converted one of French's Les Paul Gold Tops into a sunburst with "Disco sucks" inlayed on the fretboard. Apparently it wouldn't stay in tune and French, not one to mince words, considered it "a fucking disaster". 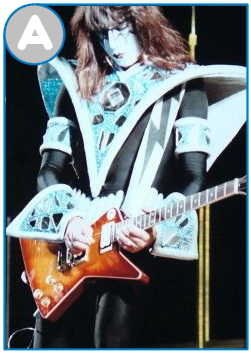 [2] See the footage from Sydney, Australia on November 22, 1980 to see the custom Explorer in action. Although the citation has been lost I have text which claims that Carr himself has been quoted as saying that the guitar was actually used to record the guitar parts for the song Talk to me as well. 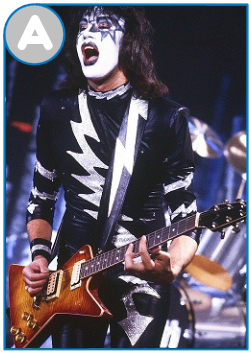