This site would have been impossible, or at least a whole lot less interesting and complete, without the help of the following people:

First off, I know what you'e thinking. "A site about Ace's guitar without Les Pauls?" Yeah, the definitive work on Ace's Les Pauls already exists (see banner below) and there's nothing I could have done to improve upon it. If I were to tackle Ace's Les Pauls all I could muster would be to take the information John Tate has gathered and put it into my own words. I might be able to add a few more pics for good measure but that certainly wouldn't improve on the excellence that is Ace Frehley Les Paul.com.

So this site is about all those oddball, strange and at times rare guitars that Ace played 1973-1980. I chose to end at 1980, with a minor foray into 1981, because that's really when Ace's live involvement with KISS ended and that's what this is about: the guitars Ace played live. Ace has been pictured with a couple of other guitars like the Gibson Marauder or the Gibson EDS-1275 but neither was ever played live.

Although Ace is less reluctant to talk "shop" than Gene he has had relatively little to say about his various guitars over the years. Most questions have naturally centered on the notable guitars like his smokers or flashers and the obscure guitars have gotten little to no attention. Like this entire site the majority of quotes on these guitars comes from Ace's 1978 Guitar Player interview and the 1996 magazine Metal Edge Presents KISS Alive!. 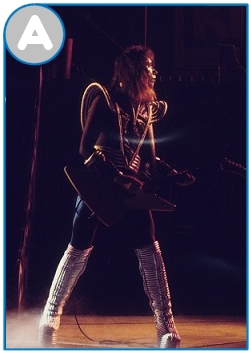