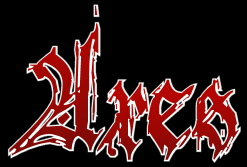 1979 saw the introduction of the Axe bass into Gene's repertoire and the beginning of a life-long association. The basic design of the bass has changed a little through the years and it's been made by several luthiers and companies.

Whether or not this is the first Axe that Gene got or not is something of a mystery. According to Steve Carr his first version of the Axe shown below was made for Gene in 1978 and even used for a few shows that year but no photographic evidence of that exists. According to Gene "the original one was made by Valdez here in Los Angeles, and I still have it around here somewhere". [*] Its first appearance is the photo shoot that was set up the day of the Return of KISS dressrehearsal, 79.06.14. These pics, which found their way into the later versions of the tour book, show the bass with a black blade and black knobs. (My original theory was that the blade was originally silver and refinished black but the dating of the photo shoots are well-established.) The headstock featured Gene's autograph and the pointy shape of the head was mirrored by a bizarre pointed part below the bridge.

Gene later referenced this bass as being built for the sole purpose of the photo shoot in a video interview for the Japanese music store G-Club. 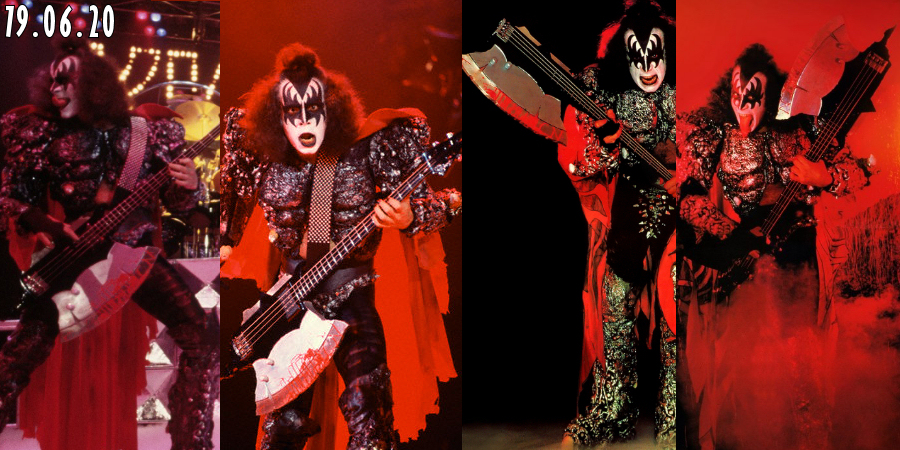 Perhaps the black blade wasn't quite "axe-like" enough because it was summarily refinished a matte silver by 79.06.20 when the promo videos were shot in Savannah. Looking closely at the pictures the refinished part of the blade is slightly different than the original finish on the edge. Along with the refinish the knobs were changed to match the new color. And for the Valdez Axe that's all she wrote. There are no actual live shots of the bass and after the promo videos it just disappears never to be seen again. If one is to believe the quote from Gene above it may just be locked away in storage since it didn't surface for the auction. 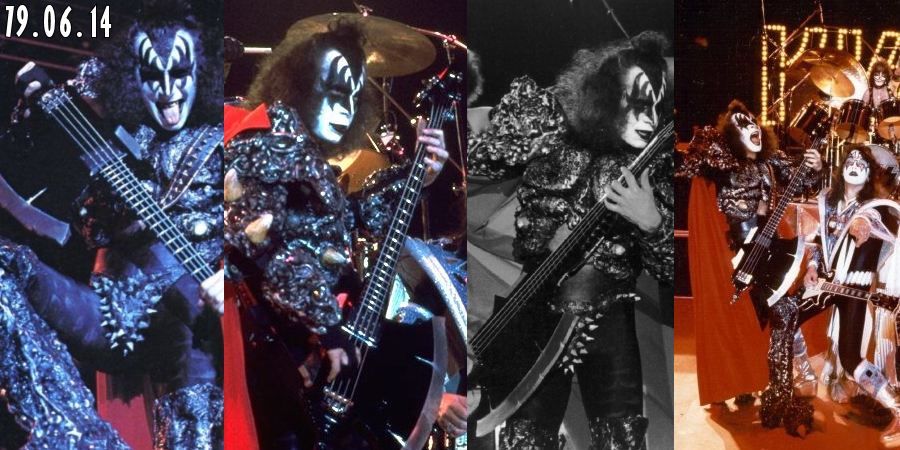 This custom prototype Axe bass was built by Steve Carr who originally came to work for the band when his one-time apprentice became Ace's guitar tech in 1978. "The first project with KISS for me, was when Gene said he wanted a guitar shaped like an executioner's axe. I made several of these until we hit a design that is pretty much what he uses today." [*] The Axe presented here has quite a different design than the one that would end up being used but according to the photos it actually made it on tour with the band, seen here in Knoxville on 79.09.12 next to Spector #2.

[*] 2004 interview at the excellent site www.acefrehleylespaul.com 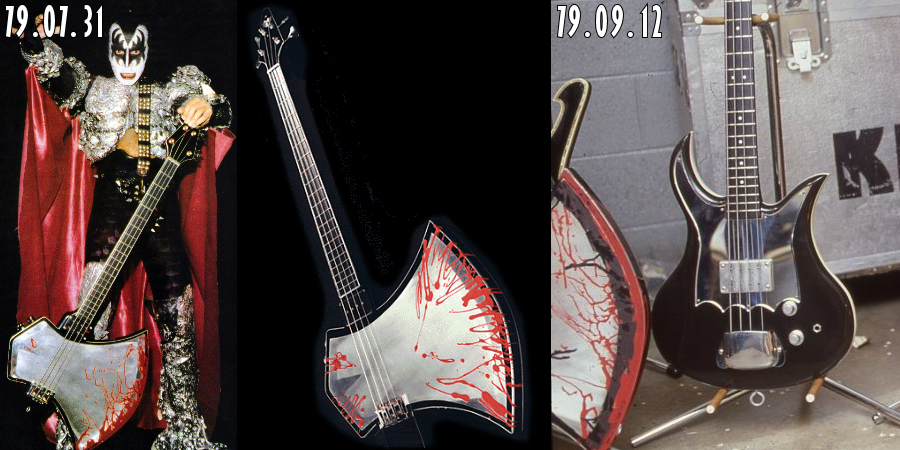 The string of prototypes that Carr eluded to were probably the ones shown below. The one in the middle does feature the pointy headstock that was a feature of all of the guitars Carr built for KISS (see Ace's mini-Explorer and Paul's Star guitar for instance). The bass on the right is slightly more problematic. On the one hand it has an inlay of Gene's makeup on the headstock that looks very similar to the one that Carr did on Spector #1. On the other hand it was listed in the Butterfields auction without the name of the luthier and it was suggested that it dated from the 1983 Creatures tour (which there is no evidence for, the Axe used on that tour was a Kramer). It has also been suggested that this one is actually from 1981 but that would make it later than the production model Kramer Axe which would cast some doubt on Carr's statement above. 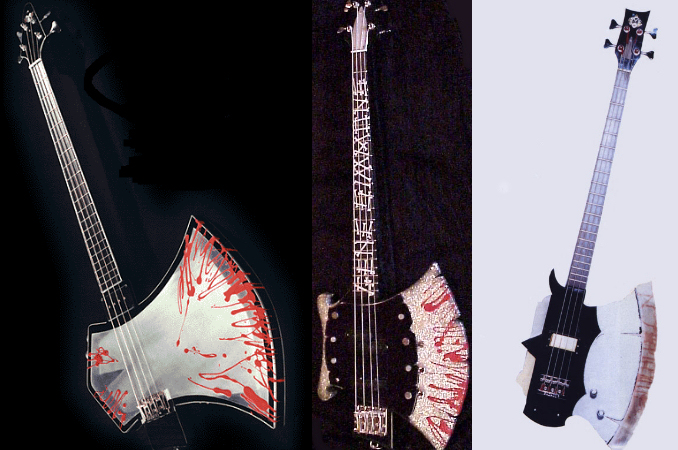 Sadly, Steve Carr passed away in 2006 which probably means that this part of the Axe story will forever be shrouded in mystery.

The shift to the Jackson comes about just before the European leg of the Lick it up tour. It's not shown in the tour book photos shot at SIR studios but instead makes its "proper" debut in the video for All Hell's Breaking Loose and can be seen briefly in the footage from Madrid 83.10.14. (And once the American tour book is printed there is a shot of the new Axe for good measure.)

The Jackson Axe continued the new infatuation with EMG pickups, this one located closer to the neck than it had been on the Kramer. The headstock was the standard Jackson "hockey stick" with all four tuners on one side. The headstock and the space between the neck and the bridge had tortoise shell overlays and the bridge was once again hidden from view by a bridge cover.

One curious detail is that the picture from London 83.10.23 appears to show strips of tape making up the black parts of the Axe body. It's harder to see in other photos (none I've found show it quite as well as this one but the one to the left is also decent) but thankfully there is a horrible closeup of Gene's tounge from the 1984 Tourbook (far right below) that shows a detail of the Jackson Axe and the tape on the body. This implies that the taped-up part was probably finished silver originally.

Check I love it loud and I still love you from Madrid to catch a few glimpses of the Axe.

The Jackson Axe is mercifully kept in this near-original condition for at least the two following tours; there are no noticeable alterations. The most high-profile appearance during 1984-1986 is in Animalize Live Uncensored where it gets taken for a spin for Gene's solo spot.

Photos showing the Axe during the Asylum tour, where it did look a bit out of place against the exploding layers of sequined fabric and garish make-up, are a bit lacking but thankfully there is video evidence. 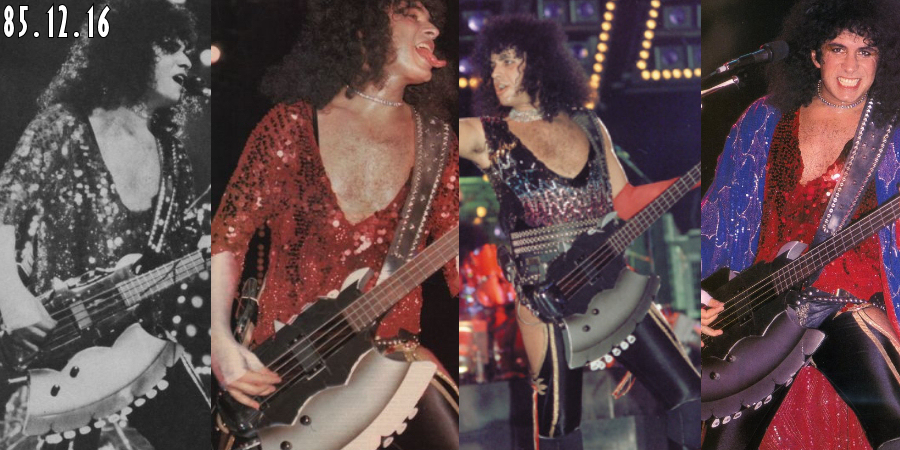 Then things get complicated... 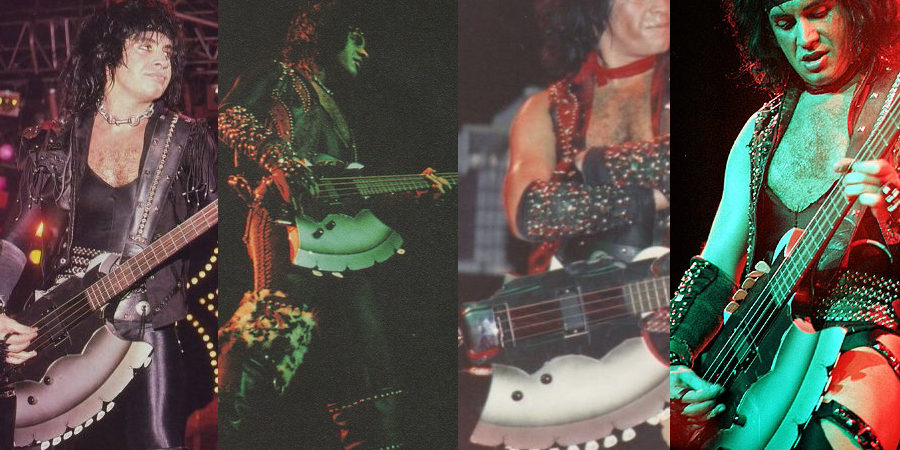 In 1987 Gene turns up with what looks like a slightly altered version of the Jackson. There's a high-gloss, mirror-like finish on the body and headstock, added rivules on the body near the pickup, and, true to form, a hole where there should be (or had been) a tone knob. Apart from those changes it appears identical to the Jackson right down to the black tuning pegs. But, during the Convention Tour of 1995 this bass was part of the museum and was labeled as a prototype Gene Simmons Axe (see pic and video below). The very obvious absence of an Axe during 1990-95, with the possible exception below, might suggest that Gene was in fact trying out various prototypes in preparation of going into the Axe business for himself. Or maybe the rather strange decision to use the Axe for a song like Reason to live during the Crazy Nights tour drove home the point that the Axe was a somewhat odd fit for the image at the time. Whatever the reason for the lack of an Axe, this particular Axe makes its last appearance during the European leg of the Crazy Nights tour, shows up for the convention and then disappears; it doesn't even feature in the auction (which a lot of other Axes do).

Overall there were some factual errors regarding the instruments during the Convention and the tour book was laughably incorrect. It showed a mirror image of the #1 Spector and erroneously dubbed it a "Spectre" bass, even claiming it was the first "Spectre" ever made. The caption next to this Axe bass noted that it was a limited-edition built by Kramer. 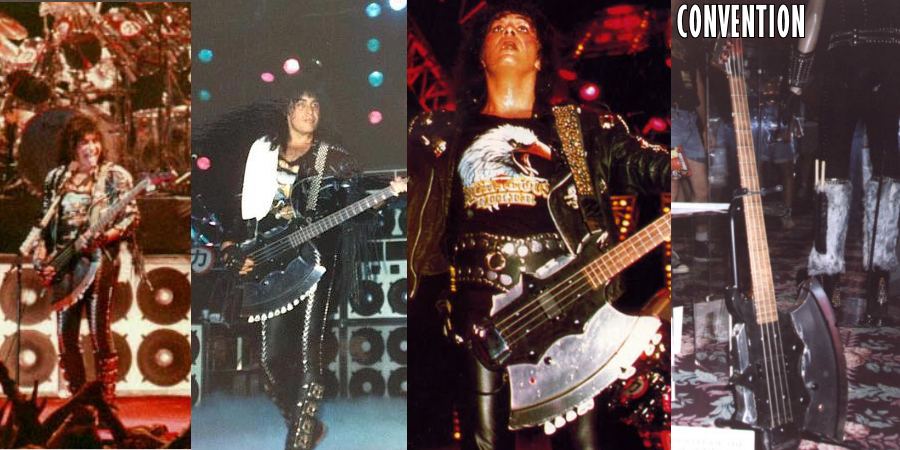 If Gene tried to use the Carr Axe live it probably turned out to be too heavy for use. One of the Viewmaster pics show the thickness of the body to be almost double that of a regular bass.

I think it's fair to say that Gene's techs have made quite imaginative use of simple black tape throughout the years. It also speaks volumes of Gene's "working-bass" concept: as long as it works and looks good enough, it will do. 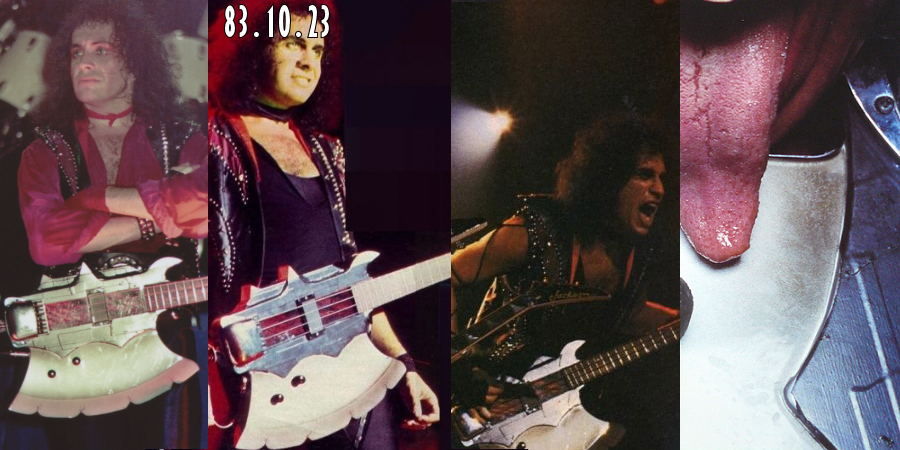