After the LoBue V custom was stolen (as I've assumed in the LoBue section) Paul played a number of shows in the summer and autumn of 1973 with a Gibson Les Paul in tow. The first documented appearance of this guitar is from 1973-07-13 at the Diplomat Hotel as represented by the two pictures on the right. Although perhaps not exactly obvious this looks to be a stock 1970 or '71 Les Paul Custom. (In Face the Music, page 117, Paul only mentions the guitar as a "black Les Paul reissue".) This wasn't the least expensive Les Paul available at the time, that honor was saved for the Les Paul Deluxe, and at a retail price of $595 it seems very likely that Paul bought it used. (Gibson shipped a total of 2,612 of these in 1970 alone so the used market was probably far from dry in 1973.) What marks this as a Les Paul Custom apart from the ebony finish are the humbuckers (the Deluxe had mini humbuckers), the gold-plated tuning pegs (the Deluxe had ivory or perloid tuning pegs), and the distinct inlay on the headstock (which the Deluxe lacked entirely). The headstock inlay is seen clearly in the picture from showcase gig at Le Tang's below.

The Les Paul Custom had a mahogany body with a maple top that had 5-ply binding which extended to the headstock. The neck was mahogany with an ebony fingerboard sporting "deluxe pearl inlays" and single-ply binding. According to the 1970 Gibson leaflet the Custom was "popular with rock groups because of its amazing sustain capabilities", something I'm sure was foremost on Paul's mind as they worked their way through the New York club scene as best they could. 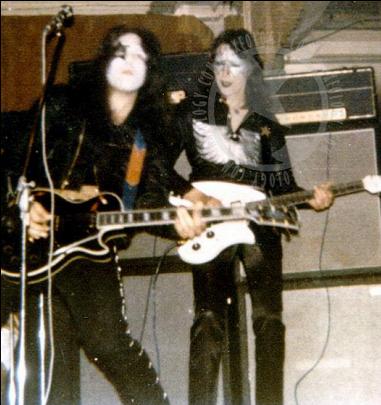 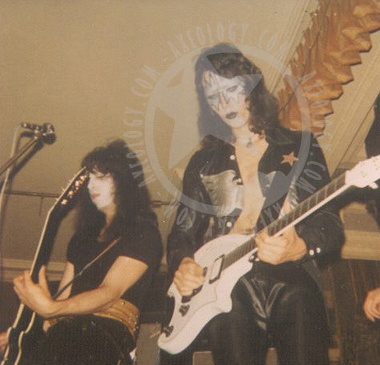 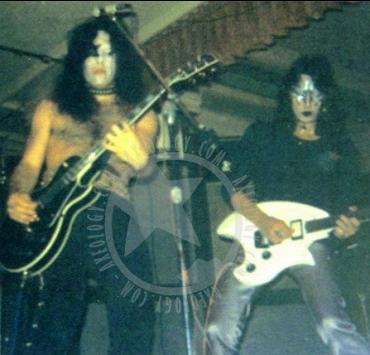 [Left] Paul with Les Paul Custom and Ace with Ovation Breadwinner during their second show at the Hotel Diplomat. 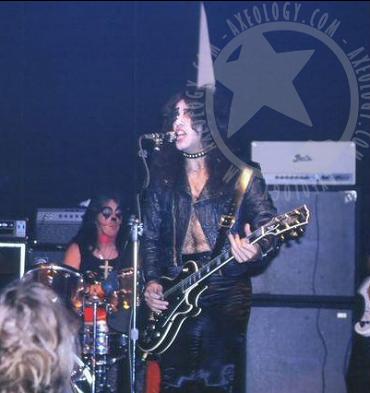 The showcase KISS played for Casablanca at Le Tang's on 1973-09-28 (see left) is the last live appearance of the Les Paul Custom but, considering the timeline and the available pictures, it was at least partially used to record the first album. Paul has stated that he used the LoBue Doublecut to record the first album (Vintage Guitar, March 1997) but as mentioned in the LoBue section more than one source, including Paul himself, have claimed that the LoBue Doublecut was stolen on May 4 and there are no pictures of it after that date so Paul was mistake or just looking for something quotation-worthy in 1997. In the chapter "On the road to Casablanca" in Nothin' to lose by Ken Sharp there is an excellent photo of Paul laying down tracks at Bell Sound Studios using this Les Paul Custom. (There is also a photo of Paul playing Ace's Ovation Breadwinner for those recordings but that might just be fooling around between takes. We do know that Ace used it extensively for recording the first album.)

There are a few photos that suggest that this Les Paul stayed on as a backup after Paul got his LoBue custom V. There's a Jeffrey Mayer photo from Long Beach, CA on February 17 and as late as May 31, again in Long Beach, CA, this photo by Julian Baum certainly seems to show the same Les Paul Custom on Ace's side of the stage.

As mentioned in the Gibson Flying V section, by late 1974 Larry Harris had secured what amounted to a sponsorship (rather than an endorsement deal) that allowed the band to avail themselves of Gibson guitars in exchange for playing them live (almost) exlusively. Although this would allow the band to procure new instruments it doesn't appear as if they always chose to do so. Case in point is this Les Paul that was used as a backup in 1975 and made its most auspicious appearance in Ace's hands on the cover of Alive! The guitar is a modified Les Paul Deluxe as evidenced by the lack of binding on the back of the body, no headstock inlay or binding, and the truss rod cover (see this picture from the shooting of the promo videos on May 15). It only shows up in Paul's hands on one occasion in Milwaukee on May 6 and there might be a single pic of Ace playing it in Fayetteville in April. (It can also be seen standing on the side of the stage in Pittsburgh, PA on April 15.) For such an iconic guitar, gracing the cover of the band's best-selling album, it enjoyed a surprisingly short stay in the band's arsenal.

There is the outside chance that this guitar might have been a special order Les Paul. Between 1972-75 Gibson offered the option to special order a Les Paul Deluxe with full-size humbuckers and a truss rod cover inscribed with the word "Standard". (The real Les Paul Standard wasn't brought back until 1976 after being on hiatus since 1960 when the original was changed into the SG. The Standard that turned up in the 1968 catalog was more or less a precursor to the Deluxe.) As seen in the pic of Ace above the truss rod cover probably says Deluxe and although Ace doesn't specify what model Les Paul it was, the modifications were apparently his. "The guitar on the cover of Alive!, I painted black. I bought it used, I can't remember what color it was before, but I painted it black, put cream DiMarzios on it and added the center pickup." (Guitars that Rule the World in Metal Edge Presents KISS Alive 1996) It might seem like an unlikely modification but it was far from unusual to swap out the mini-humbuckers for full-size ones in the early 70's when the Standard wasn't available as a catalog item. (One only has to recall the heavily modified Les Paul Deluxes that Pete Townsend used to play.) If the paint job really was Ace's work, and the finish appears slightly more matte than usual for the time, it is really a nice job. The masking of the binding alone has to have been very meticulously done. 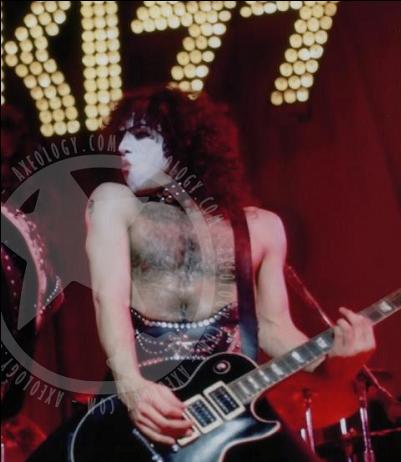 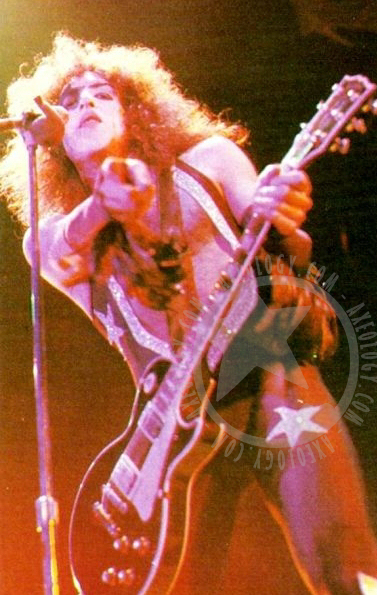 By December of 1975 a new Les Paul Custom had managed to sneak into Paul's regular rotation and this one actually appears as if it might have been made especially for Paul. For starters it has all chrome hardware which the catalog model did not. The bridge pickup has been swapped for what looks like a DiMarzio Super Distorsion and the truss rod cover looks to have "Paul" inscribed (see 1976 pic below). 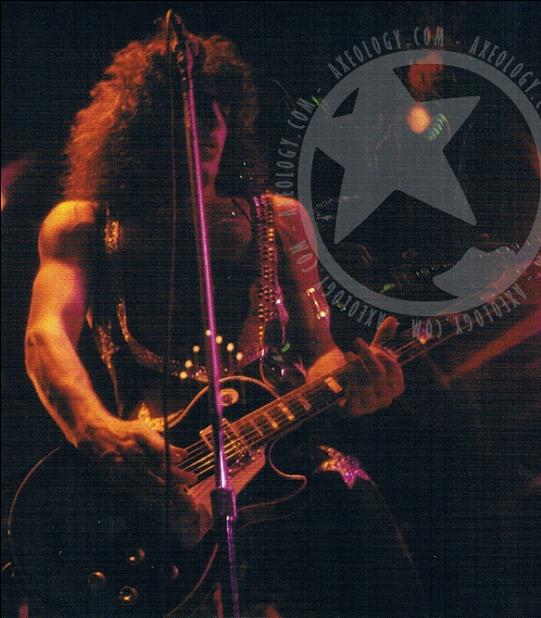 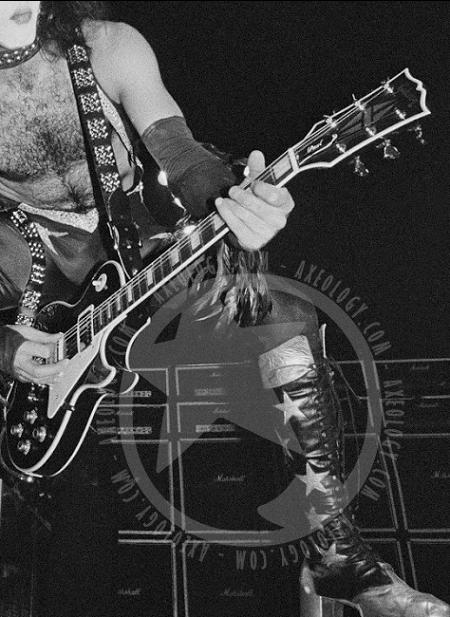 There aren't a whole lot of pictures of this Les Paul Custom but it can be seen in the video from Detroit on January 26 where it come on as a backup (check out Parasite for instance). In a Chuck Boyd backstage photo of Gene posing with his backup Gibson Les Paul Triumph from February 11 we see the Les Paul Custom standing right next to the no. 1 Flying V. But a personalized Les Paul evidently couldn't live up to the appeal of the trusted Flying V's and after having been third string for a while it gets a last hurrah on stage in Los Angeles on February 23 before it disappears from the public eye. (I should add the caveat that I have no picture or video evidence of it being used after February 23 but my collection must be considered modest.) Its retirement is somewhat delayed though as it's along for the ride on the first European tour in May/June. It can be seen standing backstage in a pic from Lund, Sweden on May 30 (see p. 34 in KISS i Sverige).

[Left] Paul with Les Paul Custom at the showcase at Le Tang's. 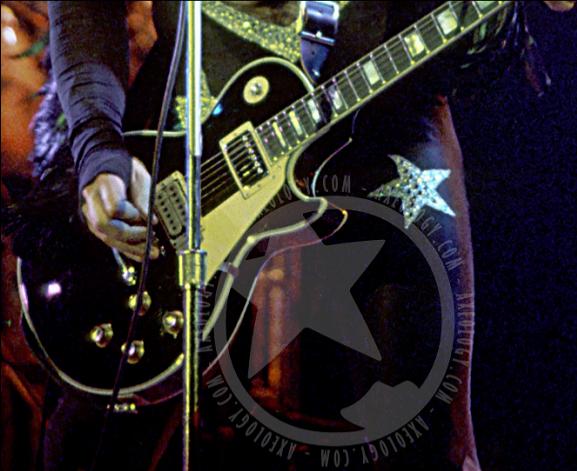 [Above] The heavily modified Les Paul that would make history on the cover of Alive!. For such a great "advertisment" for Gibson it is somewhat ironic that not a single instrument on that cover is even remotely stock. 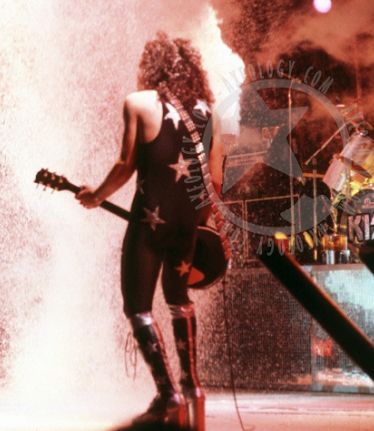 [Left] "We're young and it's our time. We're gonna do it." Paul and the personalized Les Paul Custom brave a veritable storm of confetti. 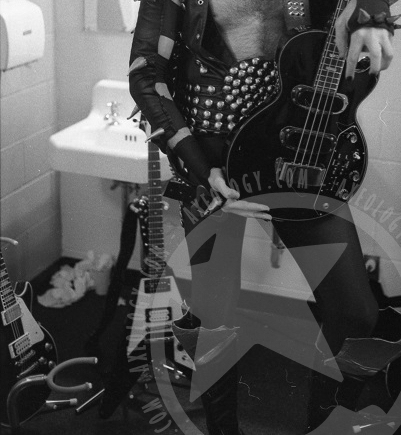 For the most part I've limited the info on this site to the guitars that Paul has played live but this little "aside" during the Elder era is too interesting to bypass without mention. Over Halloween weekend 1981 KISS entered a sound stage in New York to shoot videos for A World Without Heroes and I. Warring Abbot was present for these sessions and his photo on the right reveals that during the filming Paul partially used a Gibson Les Paul. The finished video for A World Without Heroes, however, retains no footage of Paul with this Les Paul, all shots of him feature his newly acquired Hamer Vector. The stills offer nothing to suggest what model Les Paul this is nor what kind of burst it is; whether it's new or something out of Paul's rather extensive collection of vintage guitars (as alluded to in Sounds, October 1980). It's just another one of those minor "huh?" moments in KISStory that keeps popping up. 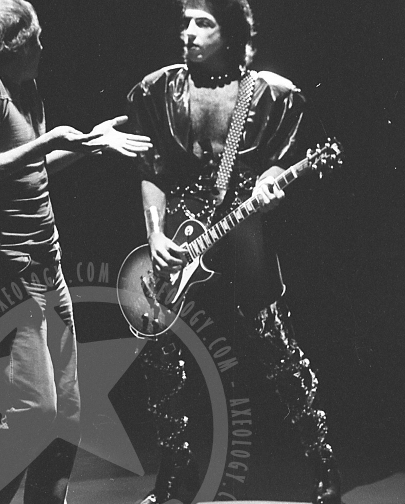 [Right] "Is the Les Paul really the look you're going for?" Discussing with the crew during a break from filming A World Without Heroes.