With the success of Alive! came the thought of a grander show. "I remember seeing Pete Townsend and going. 'Boy I wish I could do that". Gibson would give me these guitars and every night I would break one." (Guitars that Rule the World in Metal Edge presents KISS Alive 1996) This was probably not what Gibson had in mind. The Marauder was introduced in 1974 but shipping records indicate that only one (1) actually shipped that year and it wasn't until 1975 that it appeared in the catalog and price lists (where it was called the M-1). The catalog mentioned that it was available in "a choice of colors" which was true, but those colors were limited to Natural Satin and Wine Red. The Marauder was Gibson's way of competing with the budget guitars of the time and they did it using such cost-cutting construction as electronics mounted on a pickguard and a bolt-on neck.

The first time the Marauder turns up in the KISS camp is for the so-called "white session" photo shoot on May 30, 1975 as seen on the right where Ace proudly presents a Wine Red Marauder. For all intents and purposes the Gibson sponsorship was about catching a certain demographic - KISS was supposed to get kids playing guitar and the guitars KISS played were supposed to be inexpensive enough so that the kids could actually afford one. That's why the only Gibson the band actually featured in an ad for was the Marauder Custom (which was a step up but still the lower end of the price list) even as they were beginning to break on a large scale. And, most importantly, that's why Paul and Gene played truly inexpensive guitars for the first half of 1975, in fact, the Grabber Gene played during the spring of 1975 was even less expensive than the Marauder that Paul was smashing!! 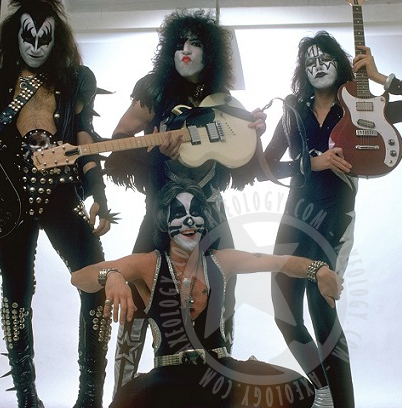 The first documented smashing of a Marauder comes at Cobo Hall on January 26 during Let me go, rock 'n' roll. (It's very probable that Paul smashed one the night before as well but since the video from that night doesn't have the encores we don't know for sure.) Watching that video, and taking a closer glance at the pic to the left, shows something that would soon change, Paul actually plays a plugged-in Marauder for the song. Years later he would deny it had ever happened but the video evidence is irrefutable. "Truly, the Marauder was the guitar that I broke on stage every night, I never played one live! They were horrible." (Vintage Guitar, March 1997)

According to Bill Aucoin, the Marauders that were smashed were defective, B-stock or just plain fakes. "It cost us $65 a piece. What they would do was, they would agree to take broken parts or whatever they had and make bodies. There were no real guts to it. Then we would saw the back of it [the neck] so it would break easy, because Paul couldn't break them." (Warman's Field Guide to KISS Collectibles, p. 499) This explains this backstage photo of Paul showing little love for the sacrificial lambs.   However, there are backstage pics taken by Chuck Boyd as late as February 11 that show the Marauder standing among the rest of the guitars to be used for the stage, something that seems unnecessary were it only to be brought out for breaking.

[Above] Soon to be reduced to firewood. Ace shows off the "sacrificial lamb" Marauder, a guitar he wouldn't touch with a ten-foot pole. 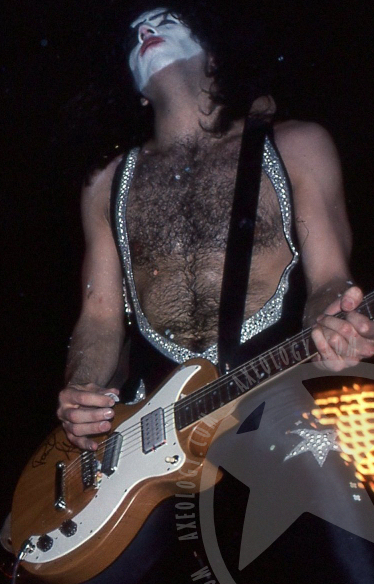 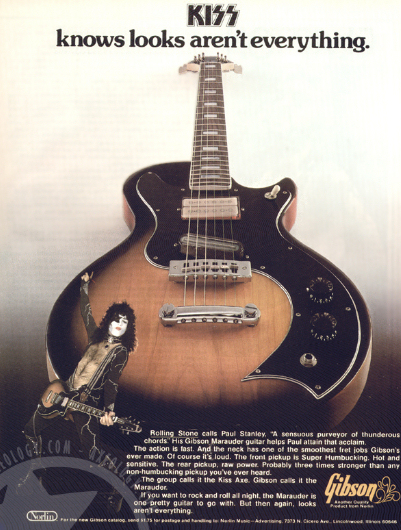 [Left] Paul in a rare moment of actually playing a Marauder before smashing it to bits.

[Right] 1976 Gibson Marauder ad. This particular design was used for a number of ads in 1976. Ron Wood did one for the S-1 and Peter Cetera had his own for the Grabber.

As the band's popularity rose Gibson were poised to take advantage. Remember, Gibson had gotten in "on the ground floor" in late 1974 when the band was still struggling and just barely selling records. Now, with Alive! literally flying off the shelves, the band ready to reveal a new look and a brand new, hopefully even more successful album, Gibson decided to get some added mileage out of the relationship. The 1976 "white session" shot by Barry Levine on April 9 got turned into the 1976 Marauder advertisement on the right. Whatever one may think of this particular ad it was definitely a step up from the 1975 Marauder ad...

The Marauder Custom that KISS "endorses" here was a slightly more expensive model, a whopping $150 separated it and the M-1 in 1976, that was only available in the sunburst tone seen in the ad. This is the premier showing of the new look of the pickguard. Up until 1978 the M-1 retained its less "stylish" pickguard with the rounded lower edge by the output jack, after that the Marauder Custom disappears from price lists and the M-1 appropriates its pickguard (albeit in one-ply).

Since there is relatively little to say about the Marauder in terms of KISS - Paul smashed them, the end - the rest of this section will just show pictures from various tours where Paul used the Marauder as his "sacrificial lamb". The only thing that really changes in regards to the Marauder being smashed is that by the Destroyer tour (see below) it's got a black finish, something that Gibson didn't offer on the model until 1978. The guitar model itself changed slightly, first with the change from the simple 3-way switch to a chicken-head knob that allowed for subtle blending between the two pickups. This move happened in the latter half of 1976. By 1978 the chicken-head blend knob had been relocated and sat between the volume and tone knobs. These subtle changes are rarely visible in on-stage pics but smashed Marauders in fan's possession show these differences. 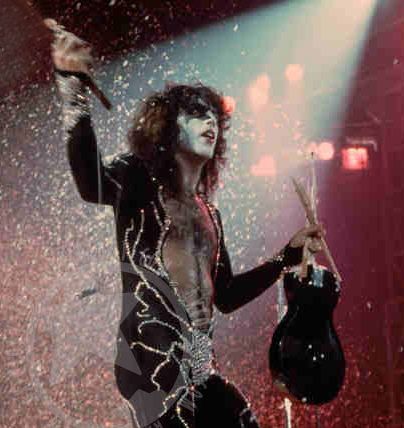 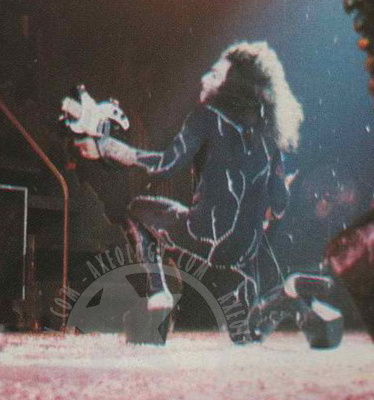 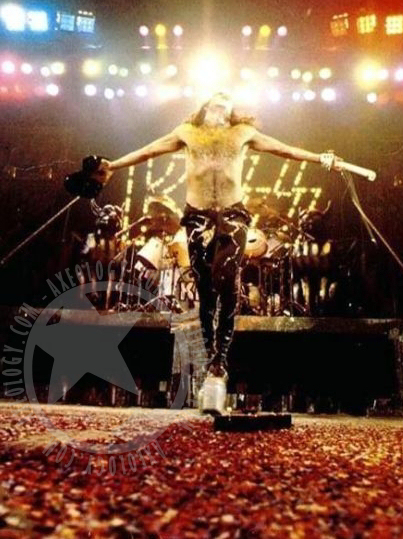 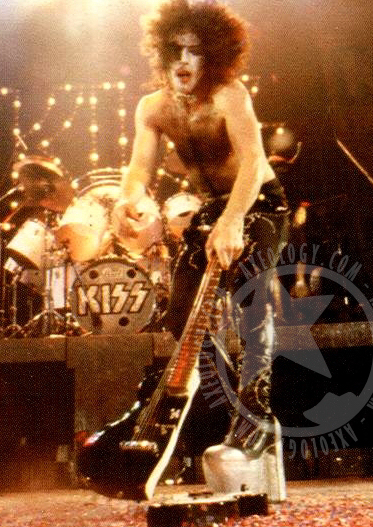 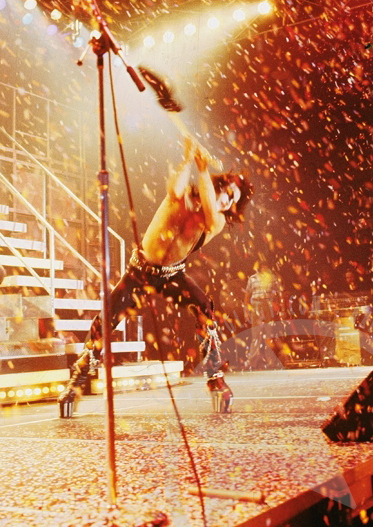 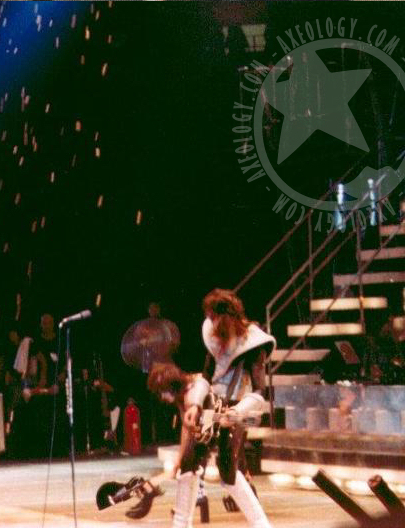 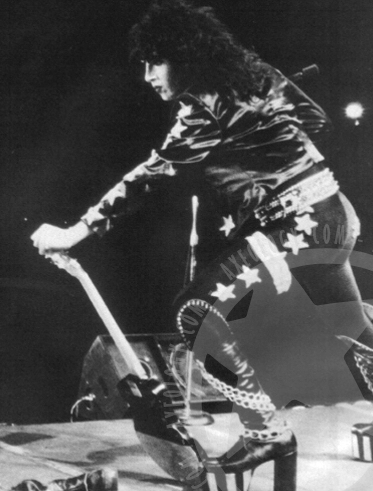 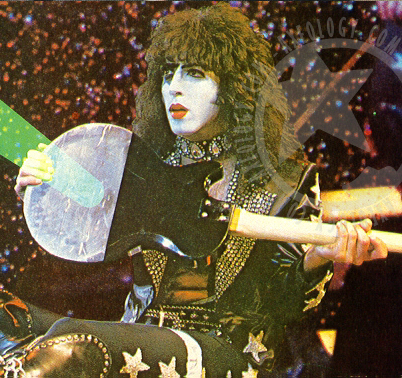 The Marauder - the guitar that saved KISS. For the pivotal "impostor" showdown in KISS Meets the Phantom of the Park Paul uses a slightly odd-looking Marauder to thwart Abner Devereaux's forces of evil. Despite this, sales of the guitar apparently didn't soar. 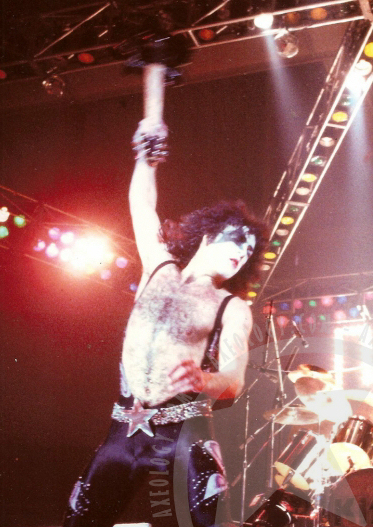 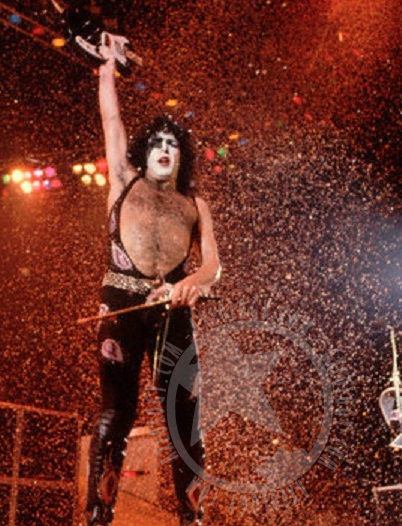 Last produced in 1979 the Marauder was officially discontinued in 1980. Gison shipped just over 7,000 of the Marauder through the years. A conservative estimate would be that Paul smashed about 300 "defective" Marauders 1976-1980. 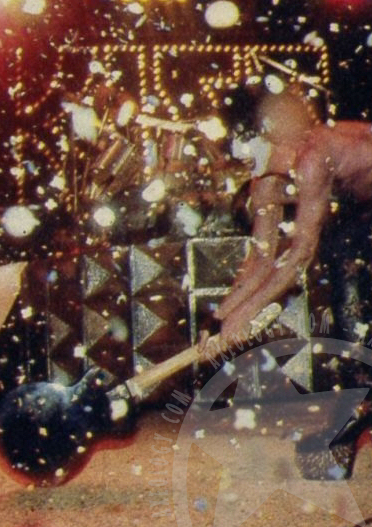 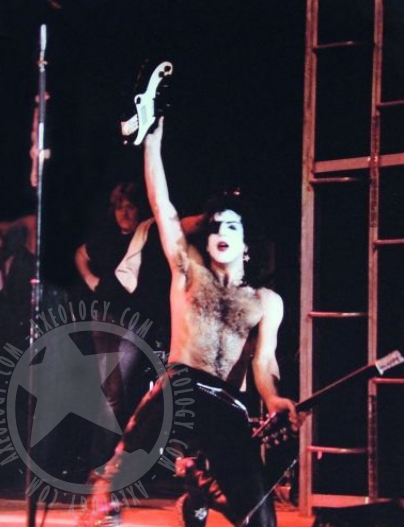 [Right] Stock-piling guitars to smash. Paul proudly displays a pre-1978 Gibson Marauder (note the chicken-head blend knob on the horn) which suggests that the band bought a lot of guitars for future smashing... enough to have some left over for this show in London on September 9, 1980.

[Left] The Marauder goes to Germany! Taking a few practice swings in front of the ZZ logo.

[Right] Sawing the back of the neck for an easy break didn't always work. Here the neck has splintered completely instead of just breaking. Occupational hazard no. 21 in the life of a rock star: a hand full of splinters.

[Left] Another example of a "bad" break. Here the body splits before the neck breaks, a not altogether uncommon occurance.

[Right] Another body breaking, this time prematurely. The classic way to break a guitar is to hit with the side of the guitar, where the neck joint is strong even if the neck is sawed-through, and then, when it's time to break it for real, make sure that the back of the guitar hits the stage so that the neck joint (or the sawed "notch" in the neck) folds in on itself.

In 1983, after the Marauder had been oficially discontinued for three years, the band had to look to another guitar to smash on stage. Fortunately Gibson had replaced the Marauder with a similarily priced model called the Sonex which was a strange beast. It was produced with a Multi-phonic body that was primarily made of Resonwood (not to be confused with Rosewood). Basically the guitar was a block of mahogany, that Gibson chose to call a "tone wood core", which was then surrounded by the Resonwood which, as far as I can tell, could be any combination of woods in a ply-wood type composite.

The least expensive of the Sonex models was the Deluxe and judging by pictures and smashed pieces in fans' collections this seems to have been the guitar that was "used". The previous deal of buying defective or fake guitars was probably still in effect but much like its predecessor the Sonex was officially discontinued in 1983. 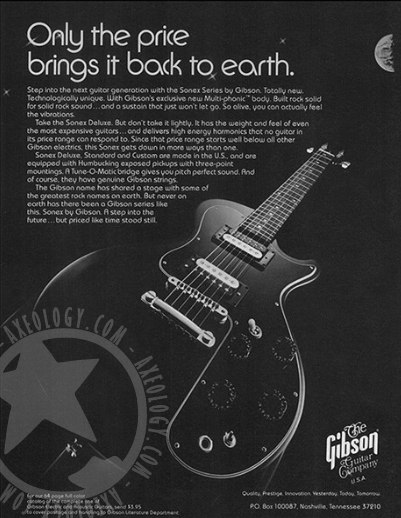 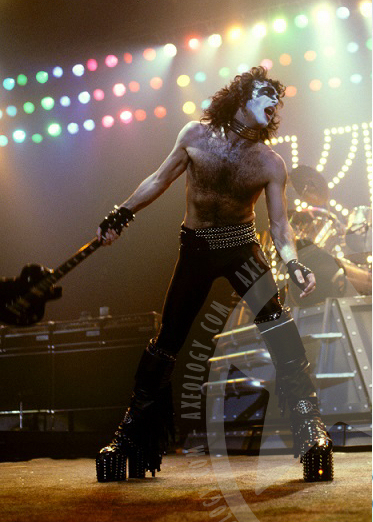 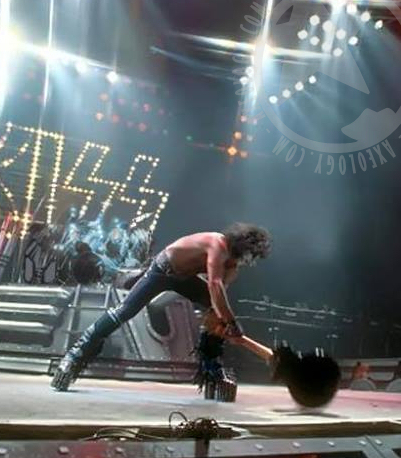 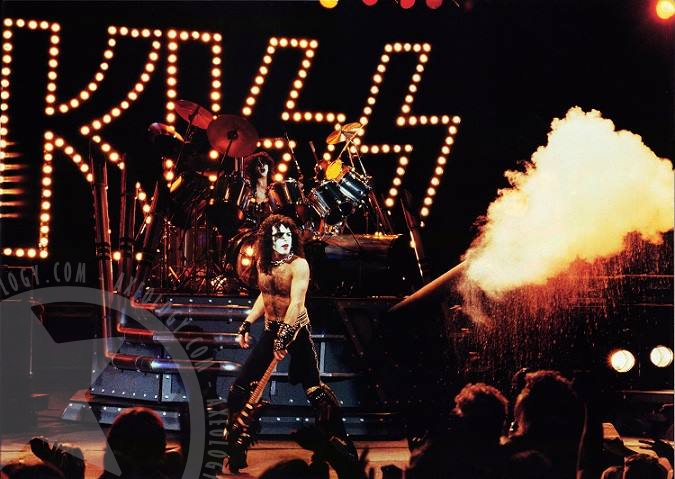 Not all the guitars smashed during the 10th Anniversary Tour were Gibsons though. In this photo Paul is getting ready to manhandle a dual-cutaway guitar with three single-coil pickups and a decidedly un-Gibson like headstock. Judging by the headstock it looks somewhat like a Samick but that's really just a wild guess and pending further pictures this remains a mystery. (The Gibson Invader, discussed below, had a headstock similar to this one in 1984 but it was never offered with single coil pickups.)

[Right] Just hitting the floor. Not unlike the Marauder the Sonex had a propensity for untimely breaks. This photo shows that the body has already split in two as Paul goes to deliver the killing blow.

[Right] A 1981 ad for the Sonex describing the guitar as "Technologically unique". Another piece of promotional material claimed that the composite Sonex body had been tested in temperatures -40F to 180F. Obviously a great instrument for playing outside in a Canadian winter.


As the band unmasked for the Lick it up album and tour they cut back on most of the "extras" during the shows, even going so far as to radically cut back on pyro, but the guitar smashing continued. Sadly, there appear to be no photographs of Paul smashing guitars during this tour. (Photographs almost certainly exist but I have yet to come across any.) Thankfully there are two good video sources from the tour, both available in excellent quality. They both show Paul smashing a Les Paul-style guitar with a sunburst finish and no pickguard. My best guess is that when Gibson discontinued the Sonex in 1983 the KISS camp wasted little time and just used the nect best thing. Introduced in 1983 as part of the American Series the Gibson Invader was basically a bolt-on version of the Les Paul but with the toggle switch re-located down by the knobs. There's a slight quirk here as the toggle switch seems to have been located below the tailpiece (as seen in the pic) on the early ones from 1983, some of which even featured a bass/treble ring as in this ad. By 1984 the toggle switch had moved to the slightly less awkward position above the knobs.

That said, the French artist Tommy Lorente has among his collection of guitars a Sonex Deluxe that was supposedly smashed by Paul during the October 15 show in San Sebastian, Spain so it seems as if Paul pretty much smashed whatever was on hand at the time.

[Right] With Paul at the ready, poised to demolish yet another innocent guitar, Eric sounds the salute. 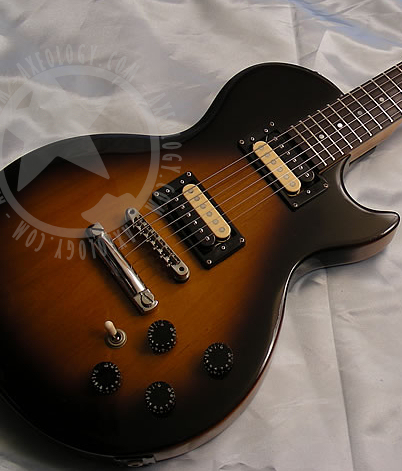