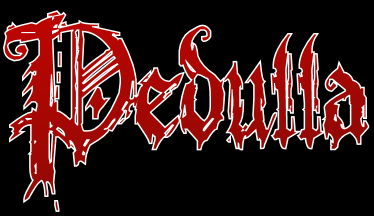 In 1983 Gene started playing Pedulla basses, settling on the MVP model in black with a single P-bass pickup and adding his trusty old bridge cover for good measure. The MVP makes its debut in the 1983 European edition of the Lick it Up tour book and in the video for the title track. In the pictures in the tour book the MVP seems to retain its original Bartolini pickups but by 1984 the bass seems to have EMG replacement pickups. (Bartolini pickups have a relief logo while the EMG's have a small printed logo in white.) This Pedulla, the #2 Spector and the Jackson Axe carried the load for the 1983/84 tour. 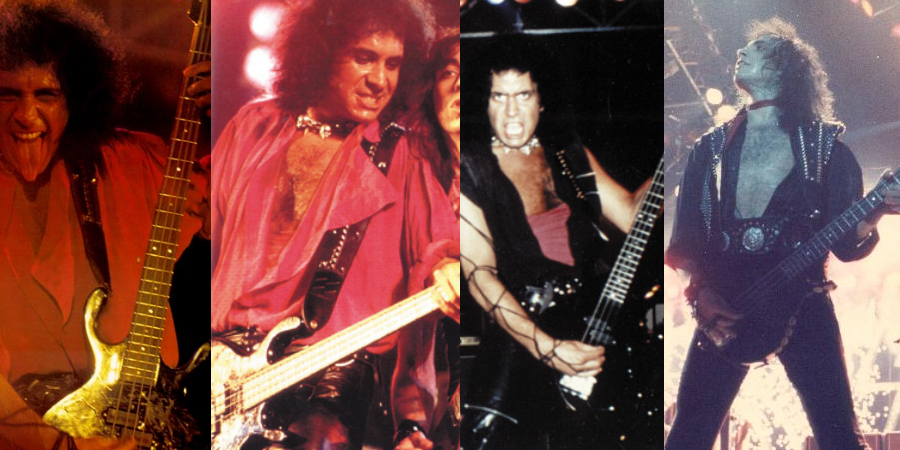 By the time of the European leg of the Animalize tour in the fall of 1984 the EMG pickups are clearly on the bass. By now the black Pedulla is Gene's clear #1 bass. It features heavily in the promo for Thrills in the night, gets some screen-time in Animalize Live Uncensored, and just does its job night in and night out as the weapon of choice for the entire Animalize tour. (It did suffer for it though. Late in the tour there is obvious wear and an added piece of protective tape where Gene's arm rests.) 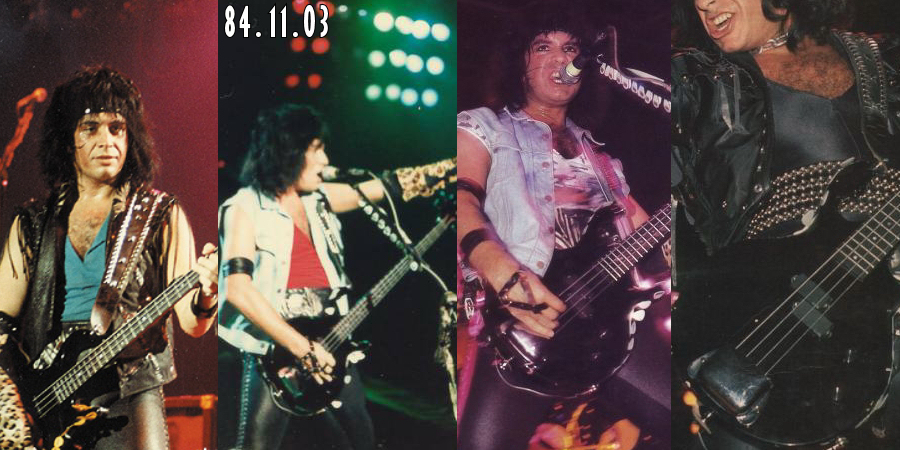 In 1985 Gene appears with a white Pedulla. Perhaps the band felt that the black Pedulla would clash with the Asylum stage outfits' general "Vegas showgirl on drugs" look. It's a complete copy-paste of the black version with the exception that this one looks to be fitted with EMG's from day one. Notice the wear marks in the last pic. 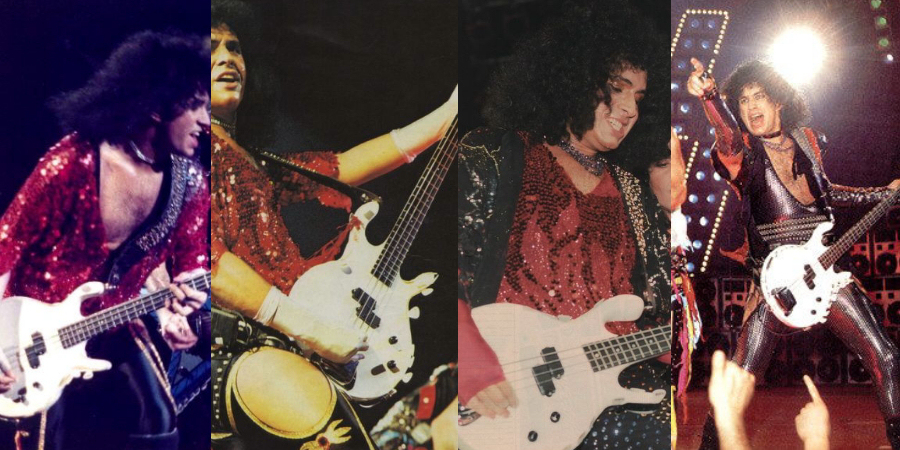 Far be it from Gene to allow any bass to stay unmolested for long. In 1987 the black Pedulla makes a comeback and both it and the white version are re-finished. Dating the finish on the black one is a little tricky, it just appears for the video shoot for Turn on the night fully decked out with the Dragon face (to match Gene's leather jacket) and then gets fairly regular use on the Crazy Nights tour. Now, I'm just going to assume that this is in fact a re-finished version of the black Pedulla above (the Serial No above is in fact the one given to mthis re-finished version) but there is a slight inconsistency: the placement of the knobs.

Curiously enough 1986 also sees the sudden appearance and then subsequent disappearance of a red Pedulla. So far this single picture is the only "clear" one I've been able to find but a few bootleg videos show it clearly and there are several pics from an unknown 1986 show. It is a relative rarity in Gene's arsenal and it doesn't seem to appear with any regularity suggesting it was probably just a backup.


The Butterfields Auction book identifies this bass as a Pedulla with the Serial No. MVP1240 SIMMONS.

The white Pedulla had Serial No 0698, again according to the Butterfields Auction book.

The re-finish on the white Pedulla is easier to see. For the photo shoot for the Crazy Nights album cover it is still white (albeit missing the bridge cover) and likewise for one of the many promo shots from the time. By the time of the tour rehearsals and the shooting of the promo video for Reason to live on 87.11.11/12 the makeup face was there. The bridge cover returs but is painted black to blend in better with the finish.

If we compare the last pic of the black Pedulla from the Animalize tour above to the one good close-up I've seen below the location of the knobs have shifted with the front now seemingly in the position of the rear knob in the previous configuration. This kind of move isn't very hard to do if the original control cavity is large enough but it really makes no sense to move the knobs just because. However, the relatively crude look of the finish of the headstock lizard claw, best seen in the Butterfields Auction book close-up below, makes me believe that it is a re-finish rather than a custom-ordered finish from Pedulla. One curious detail about the photos below are that for the "live" shots from the CCN video shoot the bass is missing the otherwise ubiqutious bridge cover. It has reappeared for the third shot. 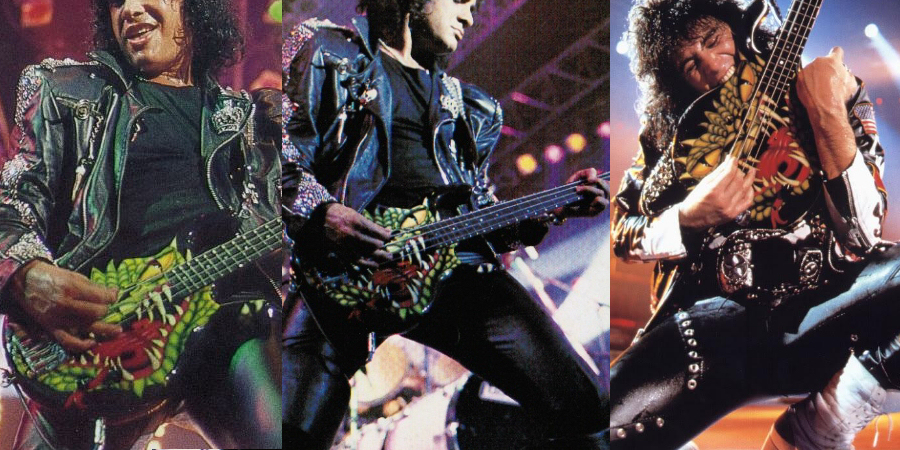 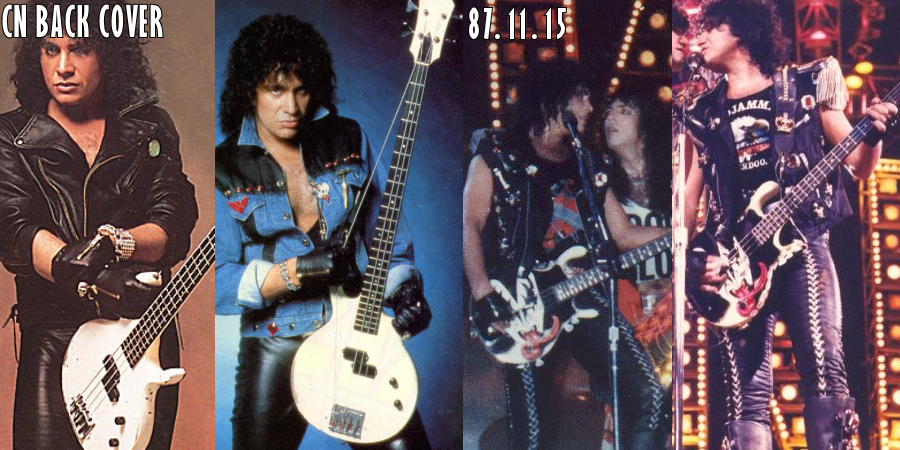 As any one might have guessed by now, change is the constant when it comes to Gene's basses and the white Pedulla will "suffer" a bit more before it is retired. First, there is a simple changing of one of the knobs to a chrome one. Why? Anybody's guess. First documented appearance is for the show at the Budokan 88.04.22 and the pics from the Ritz and the European tour in the fall of 1988 also show it in this configuration.

In between the spring show in Tokyo and the European tour in the fall the band made the Monsters of Rock circuit during the summer. For this brief interlude the white Pedulla doesn't seem to have a chrome knob but rather a chrome "cover". In the pic of Gene and Bruce from the European tour there is obviously a chrome knob, it looks three-dimensional. The video footage from Schweinfurt below and the additional pics showing the bass during the MOR stint show a chrome part that doesn't seem to protrude from the bass. Considering what happens next (see below) I think it's safe to assume that the tone control electronics were long gone at this point and that whatever occupied that part of the bass was a dummy to cover up the remaining hole. 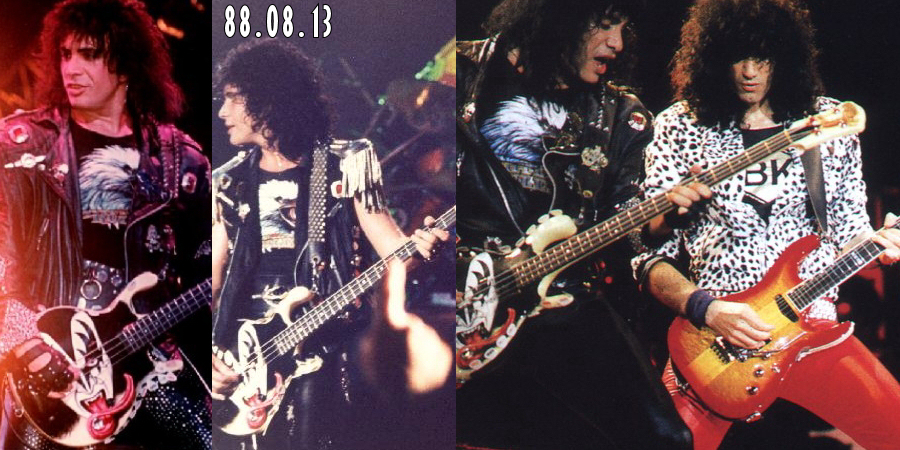 Enter the Hot in the Shade tour and more changes for the twin Pedullas. For the majority of the tour these two carry the burden of being the #1 and #2 basses (with some minor help from the studded #1 Spector) with our black dragon friend usually opening the show. Below we see a very nice clip of the black Pedulla from 90.05.18 where it's clearly visible that the tone knob is now completely gone, you can even see the hole where it used to go. In addition, the bass has gotten a fairly wide line of faux binding around the edges.

The new white binding appears to have been added to the bass in between the Crazy Nights tour and the Hot in the Shade recording sessions as evidenced by the studio picture below. Once we look closer at the still photos another issue appears. The first pic from the tour book show both the new binding, the missing tone knob, and, more importantly, that the output jack is still on the side of the body like in Detroit above. But the next picture show that the cable suddenly comes from the front of the bass, there's an added output jack where the tone knob used to be. This change happens after May 18 and possibly after June 3 (the photos are inconclusive). 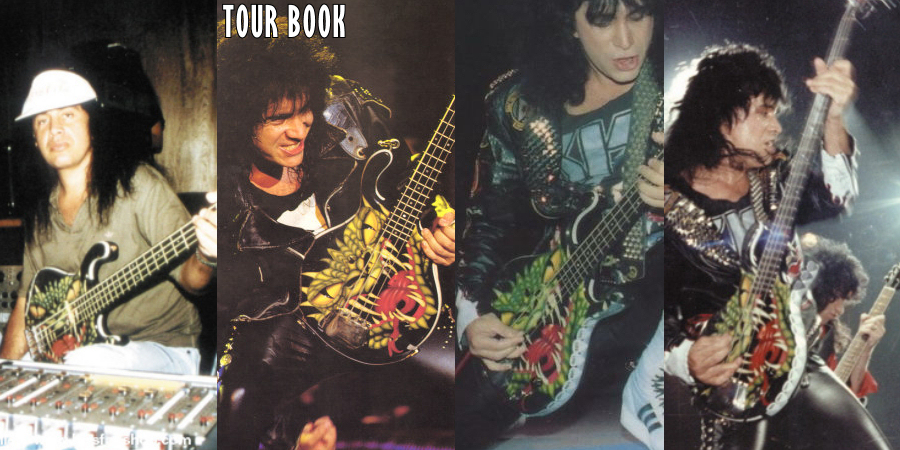 Interesting to note about the studio pic is that the bridge cover has been removed. One wonders if this was for recording purposes.

The binding can be seen "in progress" in this pic which shows that it was something resembling masking tape. Note the lack of a bridge cover which means it was probably taken around the same time as the studio pic.

Our friend the white Pedulla has no noticeable changes when the tour starts but will change ever so slightly once again. Last dated picture evidence of the chrome knob comes from Chicago 90.06.03 and then there's a void until Houston 90.08.21 where a red square knob appears in its place. Footage below is from Detroit on 90.05.18 (left) and Detroit 90.10.14 (showing the large, square red knob). The black finish on the bridge cover has also started to chafe at this point.

Fan-shot bootleg recordings from this time show the white Pedulla but not with any real clarity which makes dating the move to the red knob well-nigh impossible. 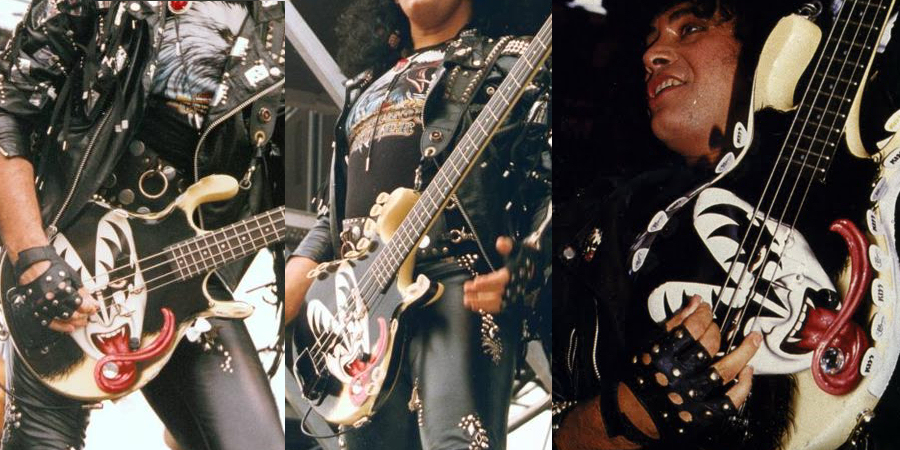 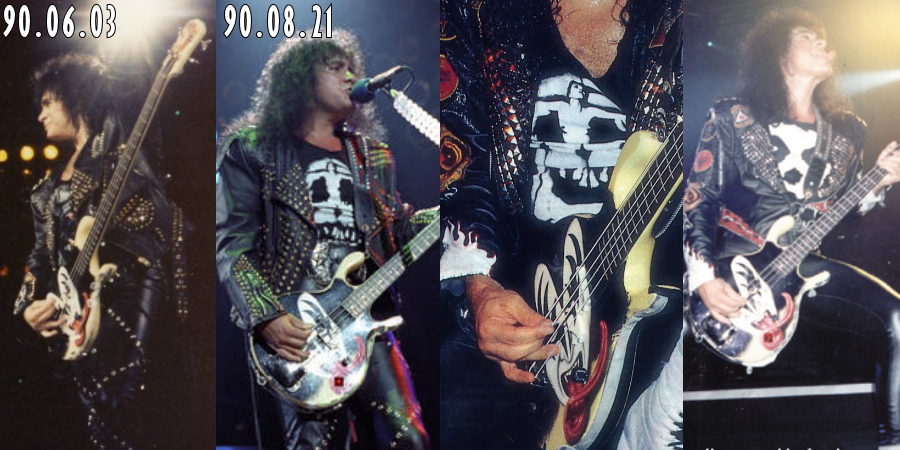 For the club tour that kicked off the band's "resurrection" in 1992 Gene relied mainly on the black Pedulla. The pickups and the knob/output jack configuration stayed the same but for some reason unknown to man or beast the white binding from the HITS tour is gone. After enjoying some international travel, pics and video show the Pedulla getting heavy use during the brief tour of the UK in late may, this bass seems to retire from use. By the time the "proper" Revenge tour kicks of in the fall of 1992 Gene had taken delivery of the Punisher and played little else from then  on. 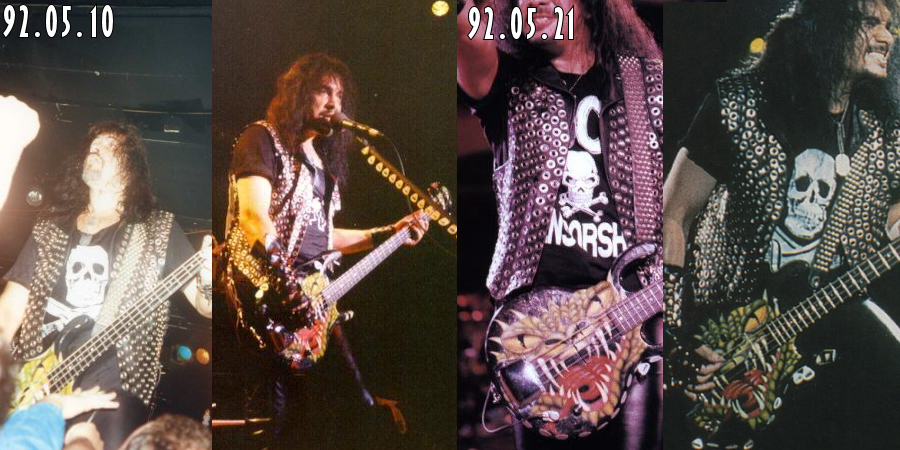 Both Pedullas were part of the museum setup that was part of the Convention tour in 1995. The white Pedulla was featured in the tour book and had finally lost all pretense regarding the tone knob. As the picture below shows the output jack has migrated to the front of the bass much as it had on the black Pedulla. Considering that the bass was more or less retired after the HITS tour where it was last seen sporting the red "knob" it's a curious change. It was then auctioned off at the Butterfields auction (page 29 of the auction book).

The black Pedulla was also auctioned off and the picture and description of it (page 140) show some nice details. There is a strange mark just above the pickup that I'm not sure what it is but it does show up on some live pics from 1990 and onward. 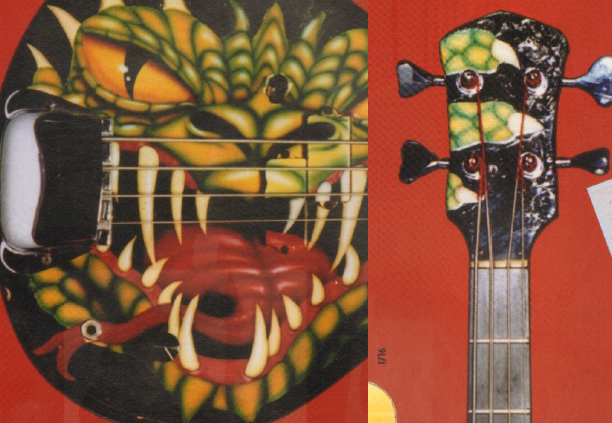 The uncut video outtakes from the M6 Special from 1990 also has a very nice closeup of the white Pedulla which shows the chrome "cover".

A very small pic from the 1986 show in Las Vegas might show the red Pedulla but it's hard to say for sure.