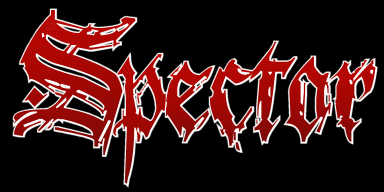 When KISS unmask in 1983 Spector #1 fades into temporary obscurity while Spector #2 becomes part of a three-bass rotation for the Lick It Up tour. It's there from start to finish, just doing its job. Video below is from Madrid at the start of the tour and Quebec which is one of the last dates. 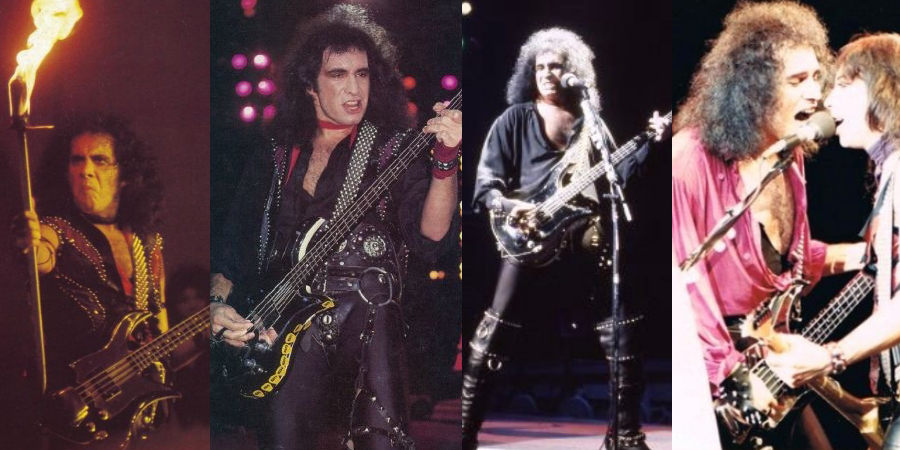 ...until it turns up for a surprise appearance in the Rise To It video filmed on 89.11.21. It looks pretty much untouched (although the pickguard looks a bit more silvery than mirror-like) and the EMG humbucker is still in place. Whether or not it was used as a "throwback" to the days of old, what with Gene and Paul donning the makeup and all, is unclear but it obviously felt right to Gene because it was brought out for the short set in Galveston on 90.03.11. Picture evidence is limited to a single promo shot and shots from Galveston. And then it just disappears... There are no pics of it from the Conventions and it is conspicuously absent from the Butterfields auction.

But, out of nowhere, there appears a second Spector#1. During what appears to be rehearsals for the gig at the Stone Pony we have an unstudded Spector with intact white binding and a makeup inlay on the headstock. It also sports the same type of EMG humbucker mounted on a plate that the studded #1 has. This bass also shows up in the M6 Special outtakes when the French show visit the band in their rehearsal space in New York. Oddly enough the bass isn't visible among the instruments when Gene introduces the rubber chicken he'll be playing for the tour, but it is the bass used for a brief take on Fits like a glove towards the end of the outtakes (see below).

The second Spector #1 also plays the better part of the set at the Stone Pony on 90.04.14. The crowd cam from this show is mostly unwatcheable and the in-house cam isn't much better but to my eyes the headstock and the short glimpses of the upper horn look more like this "lost" Spector than any other bass in Gene's arsenal. Thankfully there are also fan-shot pictures from the show. Apart from that appearance and the video clips all I've found on this bass two shots from Toledo 90.05.19. It doesn't show up the day before in Detroit and based on more bootleg video than I care to admit to having seen, it doesn't seem to get used anywhere else either. It is never seen again after the end of the tour.


Once the 10th Anniversary Tour kicks off both Spectors have gotten some work done. Spector #2 got the simple modification of switching the original pickup for an EMG. The pic from Minneapolis below shows a nice closeup. Judging by the relative number of pics it looks as if #1 and #2 shared main duties for the tour. #2 had the distinct pleasure of closing out the makeup era during the South American shows as the clip from Rio below shows. 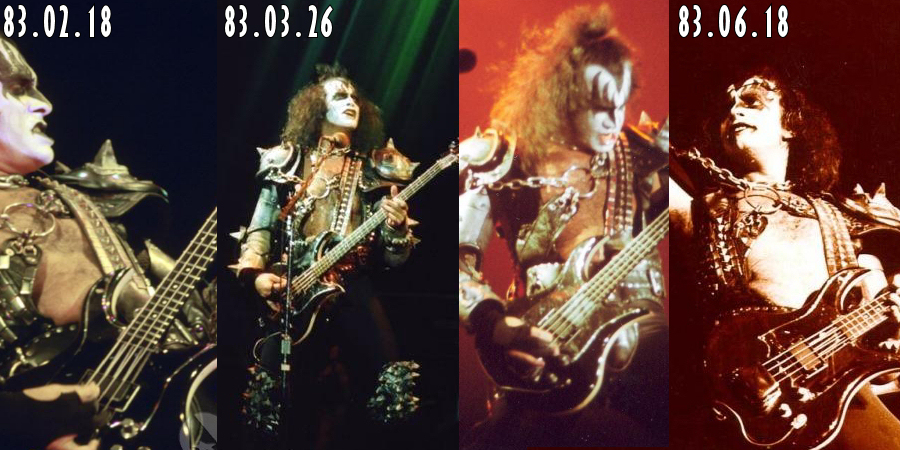 For some reason Spector #1 got a shitload of modifications all of a sudden and were I to present it like most other mods most people wouldn't believe half of it. Thankfully I've gotten great help tracking down a ridiculously high-resolution picture that shows Spector #1 pretty much head on in great light (the pic is from Norfolk 83.01.25). So, here goes...

There's a new pickup which, surprisingly, isn't an EMG but rather a regular passive pickup with massive polepieces. For some reason this has been mounted on a black plate (which I assume is plastic). The original tone and volume knobs are gone, you can see the holes have been filled, and the new ones are moved further from the bridge/strings. Where the output jack used to be there is now a third knob and the output jack has migrated to the side of the bass.

Based on the later appearance of the bass when it was auctioned off I suspect that the third knob was a non-functional dummy. 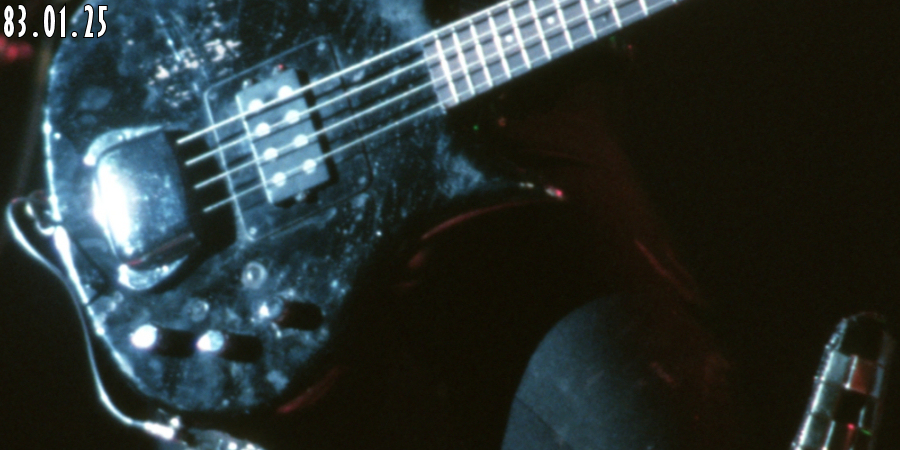 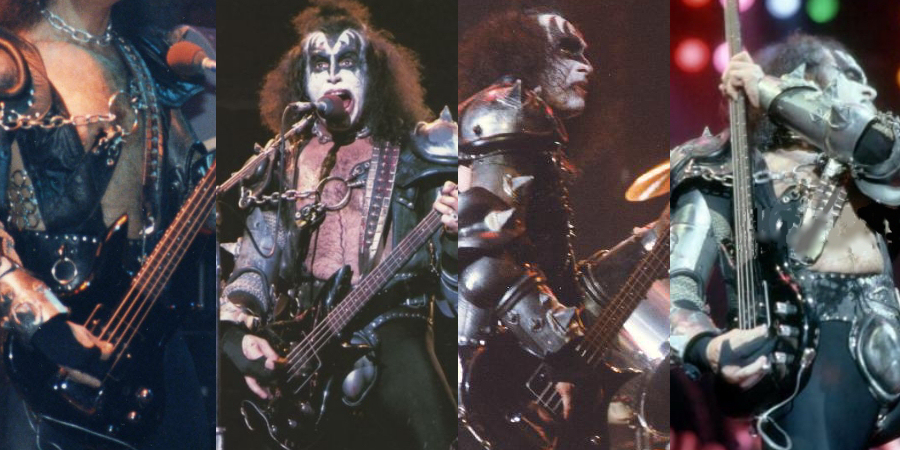 But as Spector#2 rides into the uncertain sunset Spector#1 makes a suprising comback. Actually, two #1 Spectors make a comeback. For a lot of the early rehearsals that form the raw footage we know as Exposed II the #1 Spector seems to be the go-to bass; it even manages to sneak into a promo shot from 1989 (see below). Some time since its last sighting in the first half of 1983 it's been covered with studs and it has gotten a pickup replacement; for the HITS tour it sports a new EMG humbucker. Also note that the output jack which had migrated to the side of the body in 1983 is now back on the front.

The fist clip here is from the tour rehearsals where we unfortunately get to hear Gene sing part of Lick it up. The second clip comes from Detroit 90.10.14 and has some nice closeups of the bass showing the humbucker and the makeup inlay on the headstock. 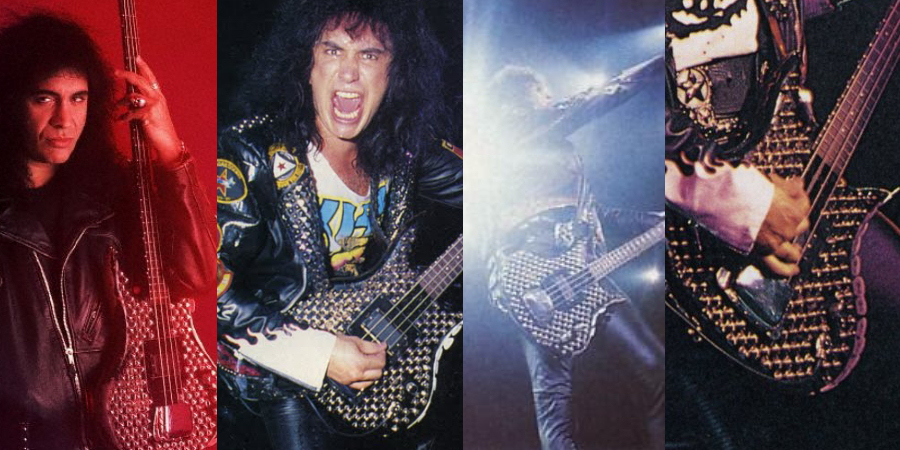 The studded Spector#1 then makes an appearance in the video for Unholy, with Gene "playing" fingerstyle as usual, and then it's off into the mist again until it shows up for the museum part of the Conventions in 1995. What's interesting about it by then is that although it hasn't been used for anything real since 1990, the pickup has changed to an EMG P-bass style much like those in the Pedullas.

The bass is brought out for the concert scene in Detroit Rock City in 1998 and the summarily disappears until the Butterfields auction. For the auction it was listed as "an original custom Spector electric bass guitar" that was "originally used on the Love Gun/Alive II tours in black finish with white sides". A few years later when it was auctioned off again there was an excellent shot of the back of the bass showing a protective cover that had been installed on the back (presumably to guard against the rather heavy wear and tear of Gene's stage outfits).

The white binding on this Spector appears to be a bit narrower than on the originals which may be an indication that both basses were finished black in 1979 and this one had the white binding repainted later on. 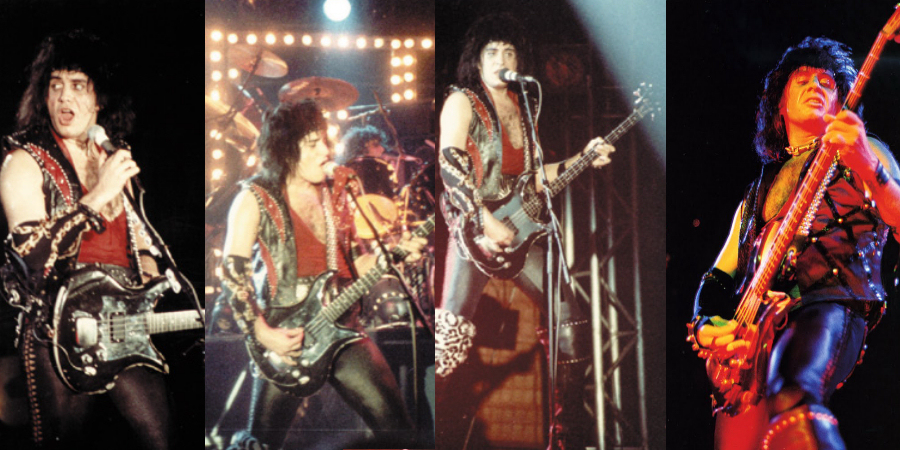 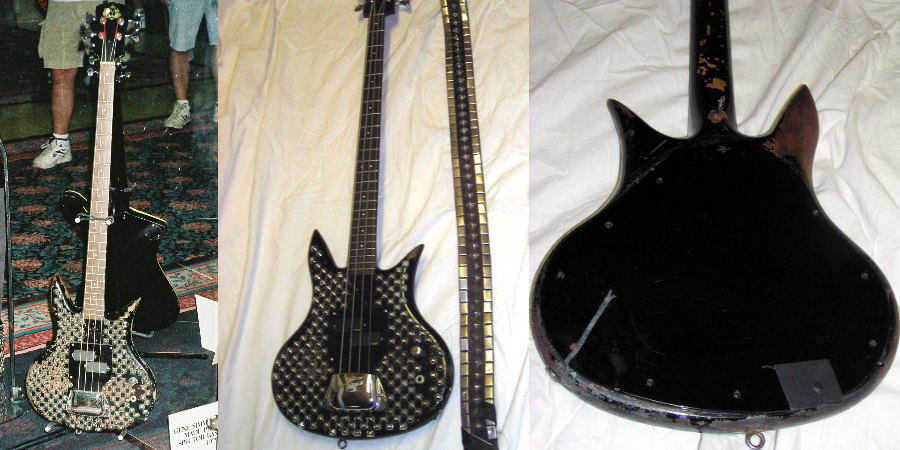 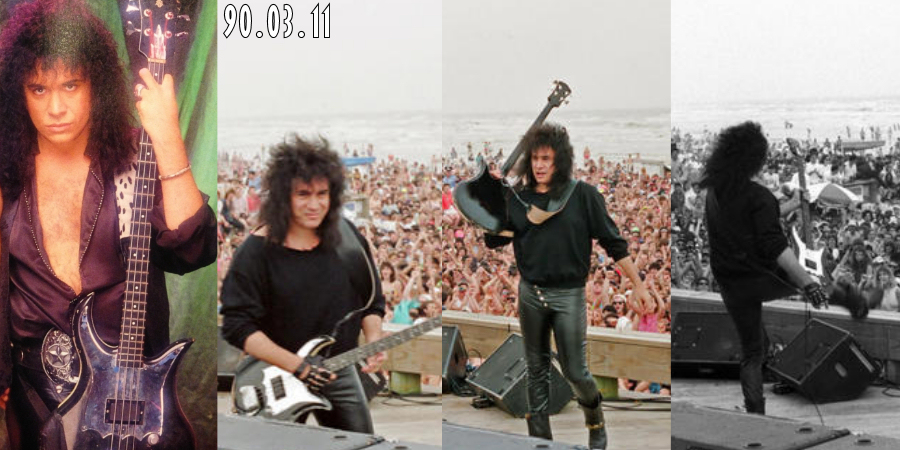 The studded Spector#1 is currently in private collector hands. The whereabouts of the "original" Spector#1 (with the white binding) and Spector#2 are unknown.

The Spector website has posted a pic of the studded #1 Spector as part of the models produced during the company's Brooklyn Era. However, the pic is a fake. The body is of the studded Spector that was auctioned off but the neck is photo trickery by the nice folks at Spector. Since Gene's custom basses were based on the SB-1 they had the same headstock as the SB-1; symmetrical shape with symmetrical tuner placement and no inscription on the truss rod cover. As we all know by now (I hope!) Gene had Steve Carr modify the headstock with an inlay of his makeup likeness in 1979. The bass shown on the Spector website (see below) suddenly has an NS-style headstock and a very prominent Spector inscription on the trussrod cover.

The description from the Convention musem display read "custom made prototype Spector bass guitar 1979" which is wrong in so many ways. 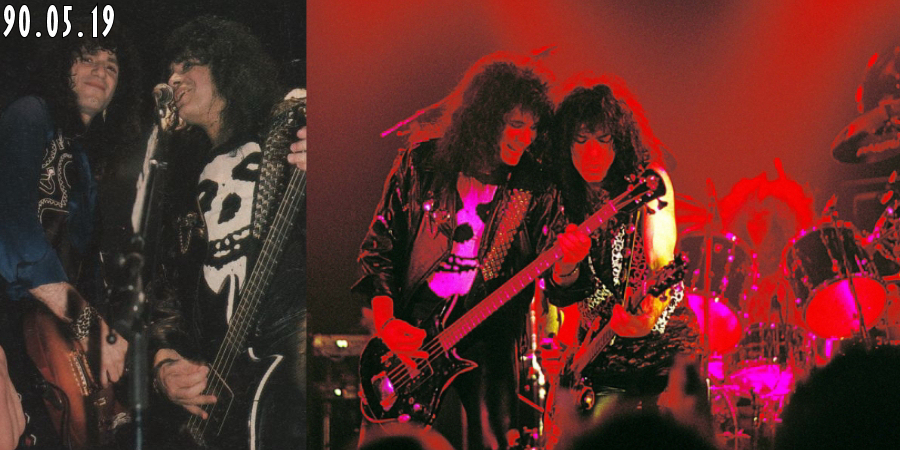 Only the first shot with Bruce is accurately dated, the other I've inferred based on Gene having the exact same jacket and bracelet.

During this tour Spector #2 starts showing significant wear on the upper part of the body where Gene rests his right arm.

For the Animalize tour Spector #2 has taken a back seat to the Pedulla and is brought out only occasionally. It gets a bit more stage time during the European leg of the tour but once the American leg starts there are fewer pics available. It does show up for a couple of songs on Animalize Live Uncensored as seen below. The wear on the upper part of the body has now been covered by some kind of "padding". This is clearly visible in the pic on the left below and also in this pic from London on 1984.10.15. (See also the 1990 promo pic below.)